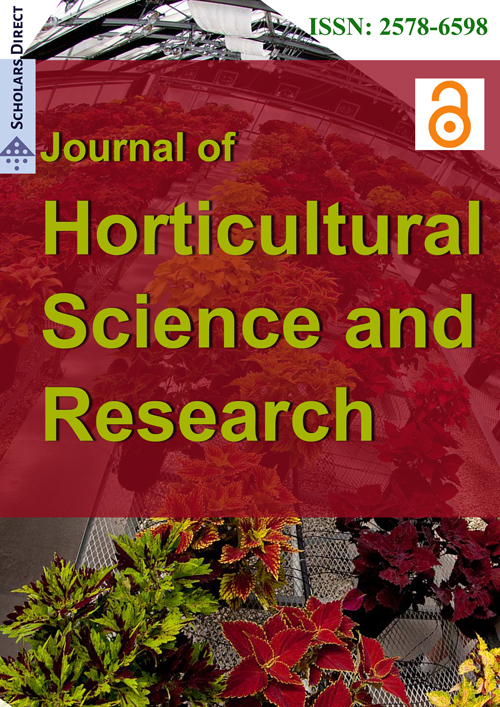 Journal of Horticultural Science and Research

Use of plants as sources of anthocyanins for new uses is an emerging area of research. Certain anthocyanins, such as cyanidins, are thought to be more resistant to oxidation and important in human bioactive defense reactions, while other pigments such as malvidins are valued for imparting stable color to fruits and vegetables, as well as for anti-inflammatory effects [1]. Use of plant-based anthocyanins, regarded as safer alternatives to synthetic colorants, has become increasingly common in the food industry [2]. In addition, anthocyanins extracted from flowers are being explored for use as sensitizer dyes in solar cells [3].

Redbud (Cercis spp), is a small tree of the legume family indigenous to the Americas, Europe, and China. It can be found as a wild spring flowering tree in much of North America [4]. C. canadensis var canadensis, the Eastern redbud, is found from the eastern and Midwestern US, north to Toronto and south to Oklahoma and north Texas [5]. Botanical varieties "texensis" and "mexicana" are found in Oklahoma/northern Texas, and in south Texas into Mexico, respectively. Various C. canadensis phenotypes have been selected from the wild for unusual leaf or flower color or modified tree architecture [6]. 'Appalachian Red' (C. canadensis var canadensis) (AR) has flowers with a strong reddish purple color, in contrast to the more common pink-purple color of Eastern redbud (Figure 1). 'Oklahoma' (OK), a cultivar of C. canadensis var. texaniana, in contrast, has a dark purple-magenta flower color. Weeping cultigens such as 'Traveller' (C. canadensis var. texaniana) (TRV) and 'Ruby Falls' (RF) have flowers that show typical purple color. An understanding of the pigments in redbud flowers will help establish inheritance of flower color in crosses of redbud cultigens.

Information on the anthocyanin content of redbud (Cercis spp.) flowers is lacking. Anti-malarial properties of the leaf and bark of C. siliquastrum have been reported and may be from flavonoids or galloyl triterpenes [7]. Salatino, et al. [8] found only monoglycoside flavonoids of kaempferol, quercetin and myricetin in leaves from multiple species of Cercis, while Cercis chinensis Bunge flowers are used to treat rheumatic pain [9] and petunidin 3-glucoside, malvidin 3-glucoside and malvidin 3,5-diglucoside were detected in flowers of C. chinensis using paper chromatography [10].

This study was done to characterize the amount and type of anthocyanins in redbud flowers among cultigens prevalent in eastern North America.

Redbud flowers were collected from 12 cultigens in North Carolina in 2015 and 2016. Flowers from Appalachian Red (AR), Crosswicks Red (CR), Alba (AB), Ace of Hearts (AOH), Flame (FL), Big John (BJ), Kays Early Hope (KEH) and Oklahoma (OK) were collected from the JC Raulston Arboretum in Raleigh NC. Flowers from Forest Pansy (FP), Traveller (TRV), Ruby Falls (RF) and a seedling Eastern redbud (ERB) were collected from 3-5 year old trees in Kannapolis NC. Flowers were carefully selected to make sure they were at optimum bloom stage, with full extension of calyx tube but before petals started to flex. Samples of 50 to 100 g were collected each year, with the exception of FL and AOH, where a sample of 30 g was collected only in 2016. All flowers were held in plastic zipper bags on ice until return to the laboratory. Pedicels and sepals were removed and flowers were weighed.

Flower color was determined by filling a 20 ml glass cuvette (93-G-10, Starna, Atascadero CA USA) with flowers. The cuvette was fitted with black cloth containing a hole of 8 cm diameter cut in the center. A Konica Minolta CR400 (Konica Minolta, Ramsey, NJ) was calibrated with a white tile, placed so the aperture was centered over the hole and color measured using Hunter coordinates L*a*b*, illuminant C, and diffuse illumination/0° viewing angle and 2° observer angle. Hue and chroma were calculated using the formula of McGuire [11]. Each cultigen was measured in duplicate except for FL.

Flower and petal pH were determined by microelectrode in triplicate to determine if pH was related to phenotypic color. Petals were removed from subsamples of redbuds when sufficient sample was available to compare to flowers (calyx, petals, stamens, styles), to determine if petal pH differed from that of the whole flower. Petals and flowers were frozen at -20 °C. Subsamples of frozen flowers or petals were placed in microcentrifuge tubes and crushed with micropestles to release juice. The pH of the juice was determined by placing the tip of a steel pH probe (Hach Co., Loveland CO USA) into the tube.

Anthocyanin separation was performed using a reversed phase C18 column (Synergi 4 μ Hydro-RP 80 Å, 6 × 250 um, Phenomenex, Torrance, CA, USA). The mobile phase consisted of 5% formic acid in water (A) and 100% methanol (B) with a flow rate of 1 ml/min using a step gradient of 0 min, 10% B; 5 min, 15% B; 15 min, 20% B; 20 min, 25% B; 25 min, 30% B; 45 min, 60% B; 47 min, 10% B; 60 min, 10% B. Compound concentrations were estimated using standard curves generated by injecting 5 μL of 0.0625-0.5 mg/mL preparations of cyanidin 3-glucoside, cyanidin 3,5-diglucoside, malvidin 3-glucoside, malvidin 3,5-diglucoside as external standards (Chromadex, Irvine, CA; Sigma, St. Louis, MO). Compound identification was performed based on retention time compared to authentic standards, and previously published reports [13-16]. Each sample was run in duplicate and content reported as mg of cyanidin 3-glucoside equivalents/kg dry weight (DW). Sums of anthocyanins were calculated to obtain total anthocyanin content and each anthocyanin calculated as a percent of the total anthocyanin content.

Data were subjected to one way ANOVA to determine significance of variables relative to genotype. Where significant, genotype means were separated using HSD or Student's t test, P < 0.05. Correlation of anthocyanin and color parameters was done using Pearson's correlation, P < 0.05.

Fresh flower weight was highest for FL (0.288 g), followed by KEH, and lowest for AOH (0.012 g) (Table 1). The remaining cultigens were of similar flower weights. Percent dry weight of flowers averaged 15% for all cultigens (data not shown).

Colorimeter data of redbud flowers showed differences primarily in L* values, with AB highest (most white) with L* of 65 and OK lowest with L* of 38. The values of a, b, chroma and hue did not clearly delineate differences in visual color. CR and AR flowers were highest in hue, about 355° (more red purple) while other values (other than those of 'AB') indicated values that were more purple (about 343°). OK, a visually darker purple-magenta flower Figure 2, could not be distinguished from other cultigens using colorimeter values of a, b, or hue. Chroma was lower for the purple flowered redbuds than for the white or red-purple flowers, indicating the reduced reflectance and reduced brightness of the purple colors. Using an absolute value of a/b, differences among red, white and purple flowered types could be found but this value could not differentiate the light purple from dark purple cultigens.

Petal pH has been implicated in various flowers as important to maintain pigment color in red or blue forms [17]. The pH of all redbud flowers and petals measured was acidic, under a pH of 5.0 table 2 and was slightly higher than that of petals. Among the redbud flowers, the pH was highest for AOH, AB, and AR and lowest for FL. Petal pH ranged from 4.13 in TRV to 4.48 in AB.

AR and CR had distinctly reddish-purple flowers, and high amounts of MDG and UK compared to other cultigens (Figure 2 and Table 3). The visual phenotype resembles that of cyclamen flowers with MDG as the dominant pigment [19]. The unknown pigment may further enhance the reddish color of AR and CR. In contrast, the higher amounts of CG combined with MG in may explain the purple-red cultigen color of the other redbuds. Although DDG can confer a blue or purple color to plant tissues [18], the low amount of DDG among redbud cultigens table 3 may have had little effect on color phenotype.

Cultigens exhibiting red-purple blooms were dominant in MDG (60% of total pigment) and in UK (30% of total pigment) (Figure 2). Redbud flowers of the typical purple-red color were higher in CG (54-71%) and MG (6 to 20% of total anthocyanin). RF, although similar in color phenotype to other purple-red flowers, had an anthocyanin profile that was between the red-purple CR and AR and the purple-red cultigens (Figure 2 and Table 3). MG and CG as percent total anthocyanin in RF were about half that of OK, but much higher than that of AR (Figure 2). In contrast, the percent of MDG in RF was three times higher than OK yet only half that of AR. The more purple color of OK compared to RF may be the result of a high total anthocyanin content with proportionally less MDG and more CG than RF.

The more acidic pH of redbud would indicate that CG and MG would be expressed as a red color [18]. Copigmentation of anthocyanins with flavonols commonly occurs in flowers, and was found in Rhododendron, a flower with cyanidin and malvidin mono and diglucosides [20]. In the present study, only Cercis anthocyanins were analyzed and only with HPLC; use of liquid chromatography-mass spectrometry will be needed to identify flavanols contributing to redbud pigmentation.

The pigment profile of anthocyanins in redbud is presented for several cultigens commonly found in North America. Relative total anthocyanin ranged from almost none in AB to 9.3 g•kg DW-1 among pigmented flowers. Three cultigens with the purple flower phenotype were found to have an anthocyanin profile containing predominantly CG and MG while the reddish-purple phenotype of AR and the pink-red phenotype of CR was found to contain predominantly MDG and an unknown pigment. To our knowledge, this is the first detailed information on anthocyanin pigments in Cercis cultigens found in North America.

© 2017 Veazie PP, et al. This is an open-access article distributed under the terms of the Creative Commons Attribution License, which permits unrestricted use, distribution, and reproduction in any medium, provided the original author and source are credited.