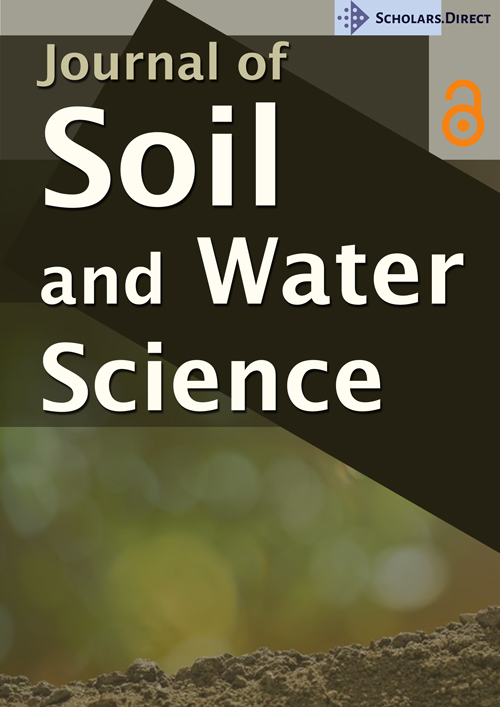 Adsorption is the mechanism that soil cations and anions (including various phosphorus (P) compounds) are retained by soil particles. The adsorption process tends to restrict compound's mobility and bioavailability [1]. Thus, the procedure for determining the P sorption isotherms could then provide information on their mobility in the soil. The supporting electrolyte concentration is chosen to mimic that of soil solution. Most commonly 0.01 M CaCl2 [2,3], 0.01 N CaCl2 [4], 0.005 M CaCl2 [1], 0.1 to 3 mM KCl [5], 0.05 M KCl [6,7], and 0.01 M KCl [8,9] have been used as electrolytes in studies on P and K sorption. Nair, et al. (1984) [10] reported that P sorption varies with ionic strength and cation species of the supporting electrolyte. For example, [10] showed that P adsorption was generally lower with K+ as the supporting electrolyte cation compared with Ca2+. These studies and others have not explained the rationale behind use of a particular electrolyte other than equilibrating the solutions in deionized or tap water.

The chemical characteristics of soils dominating the Flatwoods and Ridge regions of Florida are well described in [11] and some were also determined in this study. The soil at the Flatwoods consists of nearly level and poorly drained on the Flatwoods classified as Immokalee fine sand (sandy, siliceous, hyperthemic Arenic Haplaquods) with the spodic horizon lying within 1 m from the soil surface. The soil at the Ridge, classified as Candler fine sand (hyperthermic, coated Typic Quartzipsamments) is a well-drained sandy soil with no continuous layer limiting vertical water movement [11]. The Immokalee and Candler fine sand are moderately acidic (pH ranging from 4.9 to 5.6) with > 94% sand textural composition, have low organic matter content (ranging from 0.41 to 0.61% on Immokalee fine sand and from 1.6 to 1.96% on Candler fine sand) and low cation exchange capacity (CEC) (ranging from 2 to 6 cmol (+) kg-1), have inorganic N in the range of 8.2 and 11.2 mg kg-1, moderate to very high P (in the range of 28.7 to 46.5 mg kg-1 for Immokalee sand and 112.8 to 115.8 mg kg-1 for Candler fine sand) and K in the range of 11.8 to 15.2 mg kg-1 for Immokalee fine sand and 23.0 to 29.7 mg kg-1 for Candler fine sand (Table 1) [12]. It has been accepted that soil CEC, particularly the CEC contribution from organic matter content (OMC) has a significant influence on the soil P movement [13]. This study sought to 1) determine the effect of supporting electrolyte on the mass distribution coefficient (KD) for predicting P movement at 30- and 60-cm soil depths using HYDRUS-1D; and 2) compare the P concentrations with time as a function of soil type.

The baseline soil chemical and physical properties for soils used in the study are described in (Tables 1 and Table 2). Sorption isotherms on the disturbed soil samples (0-15 cm, 15-30 cm) were determined using the batch equilibration procedure [14]. The initial solution concentrations from potassium dihydrogen phosphate (KH2PO4) for P in 0.005 M CaCl2 were 10, 25, 50 mg PL-1. To determine P sorption isotherms, soil samples were obtained from 5 random positions per site at two depths giving a total of 10 samples. Each sample was weighed in triplicates plus a blank control. A 10 g air-dried, subsample of soil < 2 mm particle size was placed in a centrifuge tube and equilibrated with 20 ml (soil solution ratio 1:2) of 3 initial concentrations of P solutions. The centrifuge tubes were shaken for 24 h, centrifuged for 20 min, and filtered through a filter paper (Whatman, #42). All these procedures were done at room temperature ~25 ± 1 °C as recommended by [14] but the filtrate was later stored at < 4 °C until analyzed for P.

The solutions from the adsorption study were analyzed for P using ICP-AES and calibration standards of 10, 30 and 50 mg PL-1 preparation in fertilizer mixture (with additions of 0.027 mM NH4NO3 and 0.013 mM KCl), 0.01 M KCl and 0.005 M CaCl2. The amount of chemical sorbed to the soil was calculated from the difference between the initial and equilibrium solution concentration:

Sorption isotherms for P were calculated using the Freundlich equation:

Where Kf is the Freundlich sorption coefficient (mg1-N kg-1 LN) and N is an empirical constant related to adsorption phenomena [15]. The linearized form of the Freundlich equation was used to calculate Kf and N:

Concepts and governing equations for the simulations

The governing flow equations for water flow and nutrient transport are given by the [16] and convection-dispersion equations (CDE) [17-19]:

Where θ is the volumetric water content [L3L-3], h is the pressure head [L], xi (I = 1, 2) are the spatial coordinates [L], t is time [T], are components of a dimensionless anisotropy tensor (which reduces to the unit matrix when the medium is isotropic), K is the unsaturated hydraulic conductivity function (LT-1), and s is a sink/source term [L3L-3T-1], accounting for root water uptake (transpiration). The sink/source represents the volume of water removed per unit time from a unit volume of soil due to compensated citrus water uptake.

The equation (CDE) governing transport of independent solutes i.e. single-ion transport is given as:

Where c1 and c2 are solute concentrations in the solid (MM-1) and liquid (ML-3) phases, respectively; qi is the ith component of volumetric flux density (LT-1), Ф is the rate of change of mass per unit volume by chemical or biological reactions or other sources (negative) or sinks (positive) (ML-3T-1), respectively, providing connections between individual chain species, ρb is the soil bulk density (ML-3), Dij is the dispersion coefficient tensor for the liquid phase [L2T-1]. The term ra represents the root nutrient uptake (ML-3T-1) which is the sum of actual active and passive nutrient uptake. The solid phase concentration, c1, accounts for nutrient either sorbed in the solid phase or precipitated in various minerals. This is usually quantified by the adsorption isotherm relating c1 and c2 described by the linear equation of the form:

The sink term, s, for the Richards equation represents the volume of water removed per unit time from a unit volume of soil due to plant water uptake. Thus, s is defined as:

The nonlinear, predictive equations for the unsaturated hydraulic function in terms of soil water retention parameters are given by [23] as:

The results of P adsorption were described by a Freundlich model with linearized KD ranging from 0.50 ± 0.19 to 0.75 ± 0.13 kg L-1 for Immokalee fine sand and from 1.73 ± 0.15 to 4.43 ± 0.50 kg L-1 for Candler fine sand using a Cmax of 15 mg L-1 (Figure1 and Figure 2). Phosphorus adsorption was linear for the P concentration range (0 to 50 mg P L-1) studied on the Immokalee sand using fertilizer mixture with KD averaging about 0.44 ± 0.10 kg L-1 (Table 4). Freundlich sorption coefficients (Kf) were lower for Immokalee fine sand than for Candler. High coefficients were observed on Candler fine sand with Kf values eightfold greater than that of Immokalee fine sand. The Kf value obtained with 0.005 M CaCl2 was approximately twofold that obtained with 0.01 M KCl and threefold that obtained in the fertilizer mixture suggesting the influence of the cation effect on P adsorption than with water. According to [7], the lower Freundlich sorption coefficients (Kf), indicate low P retention capacity at low P concentrations suggesting that the potential risk of subsurface P movement and leaching would be high when the concentration of P in surface soils is high. The Kf and KD values reported in were generally lower than those reported for carbonatic soils in south Florida [7] where KD ranged from 14.8 to 76.3 L kg-1 and Kf from 12 to 58 mg1-N kg-1 LN. However, the results in this study agree with those of other researchers [10,13,25]. According to [13], divalent cations on the CEC enhance P adsorption relative to monovalent cations because they increase the accessibility of (+)-charged edges of clay minerals to P. This occurs at pH < 6.5 (the pH of our soils ranged from 4.9 to 5.6, Table 1, because at greater soil pH Ca-P minerals would precipitate while at lower pH (< 4.5), Al-P and Fe-P compounds dictate P adsorption. Barrow, et al. (1980) [25] also showed that at equal ionic strength below pH = 6, there was more phosphate adsorption from CaCl2 than from NaCl on goethite. This phenomenon, according to Barrow and colleagues [25], is caused because high concentration of positive charges near the negatively charged soil surface may be induced by replacing a monovalent cation with a divalent one and also if the added divalent cation has a specific affinity for the adsorption surface. Addition of cations from the supporting electrolyte, unlike using the fertilizer, induced a greater positive charge for phosphate (and orthophosphate anion) adsorption. The higher KDs for Candler fine sand might be due to high organic matter and some Fe/Al coatings that might bind P. The high Kf value in the top 0-15 cm than the 15-30 cm layer is ascribed to higher organic carbon and organic matter in the former layer resulting in increased P adsorption. Our results are comparable to those reported on Margate sand and Immokalee fine sand by Muwamba, et al. (2016) [26].

Phosphorus movement with microsprinkler irrigation as function of time

© 2017 Kadyampakeni DM, et al. This is an open-access article distributed under the terms of the Creative Commons Attribution License, which permits unrestricted use, distribution, and reproduction in any medium, provided the original author and source are credited.