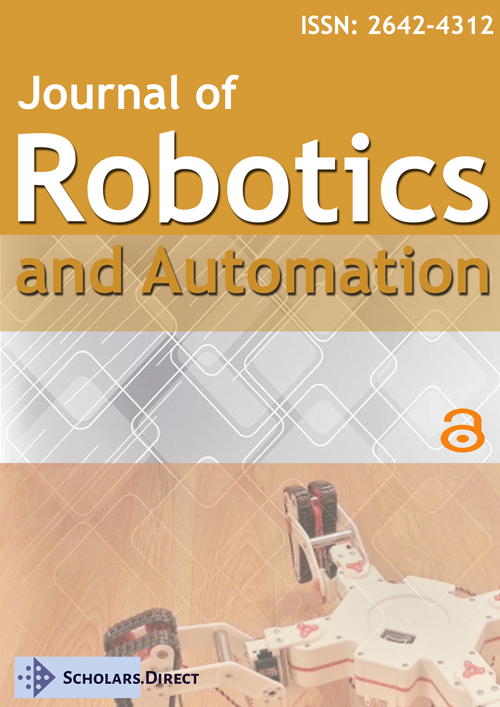 Journal of Robotics and Automation

Design and Analysis of Drive Mechanism of Piping Robot

Design and Analysis of Drive Mechanism of Piping Robot

Piping robots are needed for inner pipe operations in nuclear and oil & gas industries etc. Many pipe inspection robots have been developed. However the payload of these robots is small. To perform heavy duty operations such as grinding, piping robot with large payload must be developed. Furthermore detailed payload analysis which is important for the piping robot design is not available. In this paper, a screw-type drive unit which can handle large payload is developed. Detailed payload analysis is performed to guide the design of the drive unit. To validate the proposed methods, a drive unit was fabricated. Experiments were performed and the results demonstrate that the drive unit can climb inside horizontal pipes as well as vertical pipes with large payload.

Piping robots refer to those robots that work inside pipes. In nuclear, oil and gas industries, robots are needed for inner pipe operations [1,2]. Because of limited dimension of pipes, it is difficult to perform operations inside a pipe for human operators. Therefore, piping robots are demanded to carry sensors and equipment to perform specific operations in pipes such as pipe inspection, cleaning, grinding, and other tasks [3-5]. The drive mechanism is very important to drive these robots inside pipes.

Some parallel-wheel wall-pressed type driving units were developed [7-10], which can be con-trolled with relatively fast speed. Figure 1 shows parallel wheel drive mechanism. For the parallel driven robots, the drive unit could be jammed if there is a dent or an obstacle in the wall of the pipe, Moreover, it is difficult to design a drive unit with large payload using parallel wheel drive mechanisms.

Han, et al. [11] reported a walking drive structure as shown in Figure 2. The driving mechanism can adapt to uneven surfaces. However, it is not suitable for use in a pipe with a certain inclined angle or vertical pipe [12].

Enner, et al. [13] designed a modular serpentine drive, The drive unit can be used in many complex environments such as sand and water [14], slopes [15], and flat hard terrain [16]. Using friction to move the system forward in inclined or vertical pipes, it is not limited by the diameter of the pipes, and can well cross obstacles at the same time. However, the crawling speed is slow and the robot is not easy to control. Furthermore it's hard for worm-type robot to reach specific location accurately. Kakogawa, et al. [17] proposed a driving method to generate helical motion in pipes. As shown in Figure 3, this kind of drive units has high payload capacity [18-20], thus can be used in tilt and vertical pipes. By adjusting the speed of the motor, the driving speed can be controlled accurately. However, it is very difficult to obtain the optimal helical motion angle and avoid obstacles [21].

Ren, et al. review the screw-type drives in piping robots and present their advantages, but the force analysis is not detailed. Some grinding piping robots have been developed [3,22]; however the design and analysis of drive units are not discussed in detail.

After comparing the advantages and disadvantages of different driving methods, we find that most robots cannot handle large payload. Furthermore the detailed analysis of robot payload is not available. In this paper we propose a robot with tilt wheels to drive it inside a pipe as shown in Figure 4. The robot will move inside a pipe along a helical pattern. Even though there are different robots to climb inside pipes using helical patterns [23,24], the payload of these robots are not analyzed in detail.

In this paper, a drive mechanism of a piping robot with large payload is designed and fabricated. The drive mechanism can adapt to pipe diameters in a certain range. More importantly the force analysis between the tilt wheel of the robot and the inner wall of the pipe is discussed in detail. Experiments were performed to validate the proposed method and designed drive mechanism.

This section presents the design of the drive mechanism of a piping robot, analysis of robot payload and drive motor selection.

A drive unit with tilt wheels is designed to drive the robot in a pipe. The drive unit is shown in Figure 5.

The piping robot is developed to perform grinding operation, which requires large payload. In order to make turns inside bent pipes, a piping robot typically has several units such as drive unit, control unit and operation units, which are connected by flexible links. Figure 6 shows a drive unit inside a pipe.

It is reasonable to simplify the robot using one block for analysis as shown in Figure 6. As we can see, the drive unit must overcome the force generated by gravity and friction. The following equation can be developed based on the force diagram shown in Figure 6.

where Fg is the force generated by the drive unit; M is the total mass of the robot; µ1 is the friction coefficient between the wall and wheel for sliding; α is the tilt angle of the pipe.

Because the pipe inner surface is typically very smooth and the wheel surfaces are also smooth, the friction coefficient is small. Hence we can reasonably simplify Eq. (1):

This means that the largest force required to hold the robot in position is when the pipe is vertical. Hence we will only consider the condition when a pipe is vertical. Considering the safety issues, the drive force generated by the drive unit must be much larger than the weight of the robot.

When a tilt wheel rotates and the robot moving upwards in a vertical pipe, the following equations can be obtained:

From the above equation, we have:

Once the drive force Fd is determined, the motor torque can be computed. From Figure 7, we can see that:

where is the required torque to drive the robot; R is the pipe radius. Using Eq. (4), we have:

Figure 8 shows part of the drive unit including motor and gearbox. As shown in Figure 8, a gearbox is used to reduce the rotational speed. The motor torque can be computed:

where is the motor torque and β is the gear ratio.

In motor selection, we choose the motor torque much larger than the torque calculated using Eq. (8) considering safety requirements.

From Eq. (8), we can see that the wheel tilt angle, gear ratio and number of tilt wheels must be determined.

The robot is implemented to climb a pipe with diameter 260 mm. From the above description, we have the following parameters:

The weight of the robot is about 69 Kg. Considering safety issues, Mg is set to be 80 Kg, Using Eq. (8), the motor torque can be calculated:

Hence a MQMF011L1 motor with maximum torque 1.11 Nm is selected.

Based on the design requirements, a piping robot is fabricated as shown in Figure 10. The total weight of the robot is about 69 Kg. There are three units: drive unit, operation unit and control unit. There are flexible connections between units such that the robot can climb inside bent pipes. The diameter of the robot is about 260 mm. With the pneumatic cylinders installed in the drive unit, the robot can climb pipes with diameter range from 260 mm to 320 mm.

The developed robot was tested using a pipe with different tilt angles: 0o, 45o and 90o. Figure 11 show the results. The drive unit can drive the piping robot to finish grinding task in a vertical pipe.

A screw-type drive unit has been designed, fabricated and tested. The drive force is analyzed in detail. Based on the payload requirement, a motor was selected to drive the robot. The experimental results show that the drive unit can be operated in pipes with different tilt angles. The large payload of the drive unit enables the piping robot to carry more functional units and perform various operations.

© 2019 Zhu D, et al. This is an open-access article distributed under the terms of the Creative Commons Attribution License, which permits unrestricted use, distribution, and reproduction in any medium, provided the original author and source are credited.

Piping robots are needed for inner pipe operations in nuclear and oil & gas industries etc. Many pipe inspection robots have been developed. However the payload of these robots is small. To perform heavy duty operations such as grinding, piping robot with large payload must be developed. Furthermore detailed payload analysis which is important for the piping robot design is not available. In this paper, a screw-type drive unit which can handle large payload is developed. Detailed payload analysis is performed to guide the design of the drive unit. To validate the proposed methods, a drive unit was fabricated. Experiments were performed and the results demonstrate that the drive unit can climb inside horizontal pipes as well as vertical pipes with large payload.

Figure 3: A driving method of helical motion in pipe [21].

Figure 4: A piping robot carrying a grinding unit. The weight of the robot is about 69 Kg.

Figure 5: The drive unit of a piping robot.

Figure 6: A drive unit inside a pipe.

Figure 7: The force diagram for a tilt wheel of a drive unit.

Figure 8: Part of the drive unit.

Figure 11: The piping robot runs inside a pipe with different tilt angles.