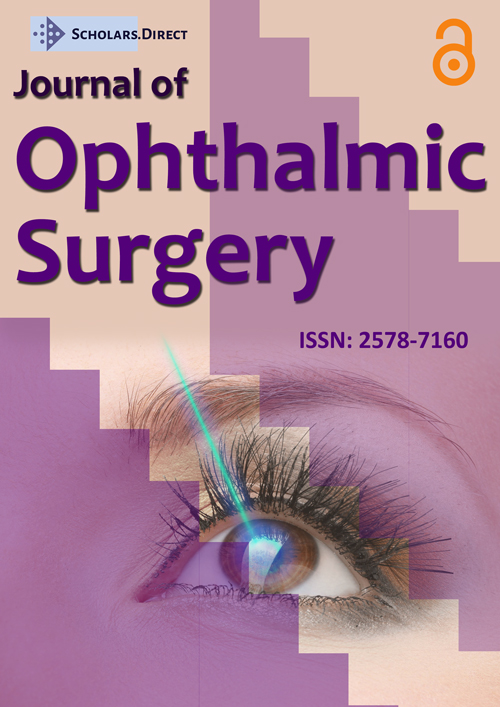 Objective: To present the outcome of a patient who underwent a novel surgical technique for keratoconus (BLAST - Bowman Layer Anterior Stroma Transplantation) and confirm its efficiency, acceptability, and validity as a future treatment option.

Methods and Procedure: The patient underwent the BLAST procedure described in this article to treat his condition, with a follow-up at 1 week, 9 months, and 1-year post-op.

Discussion and Conclusion: The BLAST intervention provides a new treatment option that shows marked improvements in all parameters measured in follow-up, with a significant increase in the patient's visual acuity. Post-operative K Max, BCVA, UCVA, and pachymetry all improved in comparison to their pre-operative values, showing that this is a viable and noteworthy future treatment option for patients with moderate-to-severe keratoconus.

Keratoconus (KC) is a pathology characterized by bilateral and asymmetric corneal thinning and ectasia, causing deformation in the corneal shape and refractive issues such as astigmatism and visual acuity loss [1,2]. This condition occurs in approximately 1:1000 Canadians [3]. It is frequently detected during adolescence and progression can occur into adulthood [1]. Etiologies include genetic, biochemical, biomechanical, and environmental factors, as well as systemic diseases including Down Syndrome [1]. Multiple treatment options are available and the clinician should take several factors into account in making the choice: severity of the disease; patient preferences; and patient characteristics, such as age, visual acuity, and refractive error [4]. For the initial stages of the disease, glasses or soft toric contact lenses may correct visual acuity; however, rigid gas-permeable contact lenses or scleral lenses are needed to correct irregular astigmatism [5]. For mild to moderate progressive disease, corneal collagen crosslinking (CXL) increases the cornea's biomechanical stiffness and decreases the cone's progression [6]. For advanced keratoconus, more invasive surgical options are required, such as penetrating keratoplasty (PK) and deep anterior lamellar keratoplasty (DALK). Nonetheless, these surgeries present several potential intra- and postoperative complications such as infections, graft-vs-host reactions, and increased cataractogenesis [7].

The most recent KC management advancements are bowman layer transplantations (BLT) and stromal lenticule addition keratoplasties (SLAK). BLT was first performed in 2014 [7] and aimed to add an intact bowman layer (BL) into the cornea, a layer that is usually fragmented or absent in KC [8,9]. On the other hand, SLAK involves the intra-stromal placement of a stromal graft alone, without the Bowman layer [10].

In taking advantage of both of these techniques while simultaneously reducing associated complications, we describe a novel approach to treat an advanced KC patient with a documented progressive disease: the bowman layer and anterior stroma transplantation (BLAST).

The surgery was performed by a cornea specialist (M.Y.C.) in a tertiary hospital center in Quebec, Canada. In the operating room, preparation of the graft from a donor cornea was performed under the microscope. After removing the epithelium using ethanol 70% and thoroughly rinsing with basic salt solution (BSS), the corneoscleral button was mounted on an artificial chamber, and air was injected intrastromally with a 30 G needle. Dissection of the periphery of the graft was completed with a 30 G needle, while the remainder of the transplant was dissected using a crescent blade and blunt tweezers. No tearing or perforations occurred during the preparation of the graft.

A 6 mm temporal scleral tunnel with a depth of 250 microns was created in the host eye. Using Melles spatulas, a posterior pocket was fashioned through dissection around the corneal diameter in the stromal plane. The graft was then inserted into the pocket using a surgical glide and a Troutman cannula, allowing the bowman membrane to be placed centrally in the cornea's depth for increased rigidity. The peritomy was then closed with Vicryl 9.0.

Post-operatively, there was a significant improvement in both clinical and topographic results. At 1-week post-op, the K Max had decreased to 62.4 D, K1 to 56.6 D, K2 to 57.1 D, and BCVA increased to 20/150 OS. Keratometry remained stable throughout follow-up at nine months. Uncorrected distance visual acuity improved to 20/250 by 9 months post-op, while BCVA increased significantly to 20/70 in his left eye. Central pachymetry with the transplant in position and centred on the apex was measured at 653 mm with the Pentacam at the 9-month mark. By 12 months post-op, the BCVA (with a now-tolerated scleral contact lens) reached 20/50, with the K Max at 65.9 D, central pachymetry at 688 mm, and the thinnest pachymetry at 633 mm, a significant change compared to the initial thinnest pachymetry of 410 mm. The visual results of the post-op can be seen below: Figure 1 shows the corneal topography map at the 1-year post-op mark, while Figure 2 and Figure 3 show the visual result of the graft at the 1-year post-op follow-up.

In our procedure (BLAST), a bowman layer (BL) and anterior stroma (AS) donor graft is placed in a dissected corneal stromal pocket to treat an advanced KC patient who demonstrated progression over six months. The BLAST technique includes the benefits of the more recent KC surgical advancements, such as BLT and SLAK, using both the Bowman layer and the stroma.

The goals of the BLT procedure are to halt the disease's progression while flattening the cornea to allow comfortable contact lens wear and improve BCVA. The surgery is sutureless and extra-ocular, which provides for fewer intra- and postoperative complications, and the graft is acellular; therefore, the risk of graft rejection is low. There is also potential to preserve the rest of the donor cornea for future Descemet Stripping Endothelial Keratoplasties or Descemet Membrane Endothelial Keratoplasties, as BLT excludes these layers [7]. However, the BL graft is thin; it has a natural tendency to roll due to its elasticity. This can cause tearing of the graft during its preparation and manipulations. Complications such as these render the graft unusable [11]. The thinness of the layer and its adherence to the anterior stroma also complicate the graft preparation. Due to pre-operative graft issues, almost 30% of BL grafts may be deemed unfit to be transplanted [11]. Because of the patient's corneal thickness and fragility, we can assume that CXL would not be efficient even if added to BLT, considering that CXL efficiency has not yet been proven for advanced keratoconus cases due to intraoperative thinning and the endothelial damage associated with the procedure itself [7]. On the other hand, the SLAK procedure was introduced in 2018 by Mastropasqua, et al. to improve corrected and incorrected visual acuity by decreasing mean anterior corneal curvature and increasing central and mid-peripheral corneal thickness [10]. However, this surgery was only performed on stable corneal ectasia patients. The authors mentioned that CXL should be done in conjunction with this surgery to stabilize and arrest the disease's progression [10].

In a 2019 study by Pedrotti, et al., intrastromal lenticules were inserted into 34 ex vivo corneas to investigate potential resulting corneal thickness restoration. Their results showed a 100% implantation success rate, with an increased corneal thickness, decreased maximum posterior elevation, and flattening of both posterior K1 and K2 [12]. Mastropasqua, et al. showed with in vivo confocal microscopy that a stromal lenticule insertion into a stromal pocket is well tolerated, with minimal associated inflammation and no long-term changes in the nerve plexus density in the confocal in vivo microscopy [13].

The BLAST technique includes many of the current therapeutic options' advantages. For one, it is an extra-ocular procedure (like the BLT), which means it avoids intraoperative complications such as endophthalmitis and choroidal hemorrhages and is also a shorter procedure as it does not require any corneal sutures [14,15].

The main advantage can be linked directly to the disease's pathophysiology; in KC, the cornea thins with a fragmented or absent Bowman layer, contributing to the cone's bulging. By adding both BL and AS layers to the cornea, total corneal thickness increases, thus reinforcing the cornea.

In 2017, a similar technique to the BLAST was used with positive outcomes in both corneal thickness increase (by approximately 100 mm) and astigmatism decrease. However, they also used UV-CXL in conjunction with their mid-stromal lamellar graft, which may add to potential complications [15]. A BL and an anterior stromal graft have never been done as an isolated procedure without concomitant CXL.

Compared to the previously described technique, our graft was inserted more posteriorly in the mid-stroma. By dissecting a more posterior and centrally located stromal pocket, it is thought that such graft placement may confer further rigidity to the cornea. This technique also has collateral improvements due to the flattening of the cone's apex, reducing irregular astigmatism and halting KC progression.

Including AS with BL also diminishes the risk of pre-operative graft preparation complications in comparison to the isolated BLT technique. A thicker graft means fewer chances of perforation both during graft preparation and positioning of the graft [16]. A thicker graft would also enable using a microkeratome system for graft dissection; thus, graft thickness would be more precise and reduce the risk of surgeon-dependent errors [17].

Using a microkeratome to prepare the graft could make way for novel customization on a patient-to-patient basis. Based on the patient's initial pachymetry, the graft could be tailored to their specific thickness needs, allowing the most optimized postoperative total corneal thickness and perhaps also keratometry.

An additional BLT disadvantage was the increased postoperative backscatter in patient vision, hypothesized to be caused by different refractive indices between the donor BL and the host's stroma [17,18]. By using donor BL and AS, this disadvantage may be decreased, as the refractive index of both posterior surfaces is identical.

Due to the graft's stromal placement, the risk of host Descemet membrane (DM) perforation still exists. DM perforation is a complication that may occur during dissection of the stromal pocket with the spatulas and during the graft placement with the canula. In 2015, van Dijk, et al. described that in their experiment, 9% of BLT surgeries performed resulted in this complication; thus, driving the surgeon to convert the procedure to a PK [18].

The main limitation of this study is the small sample size. This procedure has only been performed on one patient, so future studies will need to focus on the repeatability and reproductivity of the above results. Future studies can also use this information to investigate the possibility of personalization of grafts for keratoconus patients.

There are no conflicts of interest to disclose.

This research did not receive any specific grant from funding agencies in the public, commercial, or not-for-profit sectors.

© 2022 Choulakian M, et al. This is an open-access article distributed under the terms of the Creative Commons Attribution License, which permits unrestricted use, distribution, and reproduction in any medium, provided the original author and source are credited.

Objective: To present the outcome of a patient who underwent a novel surgical technique for keratoconus (BLAST - Bowman Layer Anterior Stroma Transplantation) and confirm its efficiency, acceptability, and validity as a future treatment option.

Methods and Procedure: The patient underwent the BLAST procedure described in this article to treat his condition, with a follow-up at 1 week, 9 months, and 1-year post-op.

Discussion and Conclusion: The BLAST intervention provides a new treatment option that shows marked improvements in all parameters measured in follow-up, with a significant increase in the patient's visual acuity. Post-operative K Max, BCVA, UCVA, and pachymetry all improved in comparison to their pre-operative values, showing that this is a viable and noteworthy future treatment option for patients with moderate-to-severe keratoconus.

Figure 1: Corneal topography map 1-year post-op. The graft has effectively flattened the steepness of the cornea, thus decreasing the severity and visual impacts of the patient's keratoconus.

Figure 2: Slit lamp view of the cornea 1-year post-op. The graft is clear and centrally positioned.

Figure 3: Slit lamp view of the cornea 1-year post-op. The graft is clear and centrally positioned.