Here, we report a KS case with the development of cardiac arrest during spinal anesthesia in which no lesions were observed in the coronarography. Informed consent for publication of this case report was obtained from the patient's legal guardian.

A 65-year-old male (90 kg and 178 cm) presented for transurethral resection of bladder tumor surgery. The patient had no history of diabetes mellitus, hyperlipidemia, coronary artery disease, or lung disease. He smoked 10 cigarettes a day for 20 years and had managed to abstinence from smoking for the last 25 years. His physical examination revealed a blood pressure of 130/75 mm Hg, a regular pulse of 76 beats/min, and oxygen saturation of 96%. His preoperative electrocardiography (ECG) showed a sinus rhythm without any ST-T abnormalities. He denied a previous history of asthma, allergic rhinitis, and food or drug allergies. Prior to administering the spinal anesthesia, 1 g of ceftriaxone was administered intravenously for the surgical prophylaxis. Spinal anaesthesia was performed at the L3–L4 inter space with a 25 gauge spinal needle and 3 ml (15 mg) of 0.5% hyperbaric bupivacaine. Ten minutes later, 2 mg of midazolam was administered intravenously for sedation. After 3 minutes, the patient began to complain of coughing. At that time, his blood pressure fell to 70/40 mmHg. Therefore, the 0.9% sodium chloride infusion was increased and 10 mg of ephedrine was given intravenously due to our initial diagnosis of spinal anaesthesia-induced hypotension. Within minutes, the ECG first showed ST-segment elevations in leads II and III, and then, tachycardia (Figure 1). The patient subsequently developed asystole.

He was intubated and cardiopulmonary resuscitation (CPR) was initiated. After the surgical drape was removed for CPR, he was noted to have an erythematous rash on his abdomen and chest. Then, we suspected anaphylactic reaction most likely to midazolam. During the 20 minutes of CPR, he was defibrillated twice due to ventricular fibrillation, and a total of 5 mg of intravenous epinephrine and 8 mg of dexamethasone was administered. His surgery was cancelled, and the patient was immediately transferred to the cardiac catheterization laboratory after hemodynamic stabilization. No lesions were observed in the coronarography, with the exception of coronary artery vasospasm. Transthoracic echocardiography showed normal contractility without any segmental wall motion abnormalities and normal ventricular ejection fraction. A detailed history taken from family members revealed that the patient had previous exposure to midazolam for a local procedure. He complained of nausea and vomiting in response to the midazolam administration. The patient was diagnosed with type I variant KS, secondary to midazolam. Using Naranjo's causality assessment scale, the adverse event was 6 indicating a "probable" reaction to midazolam [3]. He was then transported to the intensive care unit. Continuous low dose noradrenaline (0.1 μg/kg/min) infusion was required for the first 2 hours. His serum tryptase levels were greater than 200 μg/L at the 3rd hour and dropped to 48 μg/l (normal range 0-11.4 μg/L) after 21 hours (Table 1). Additionally, his procalcitonin levels were markedly elevated to 62 ug/L (normal range 0-0.05 μg/L) at 12 hours.

The patient did not regain consciousness after the event. Neurological examination and cranial magnetic resonance imaging revealed irreversible anoxic brain damage after 10 days. He underwent a percutaneous endoscopic gastrostomy feeding tube and tracheostomy procedure with propofol-based anaesthesia without local anaesthetic at the ICU. The patient was followed 25 days at the ICU and was transferred to a palliative ward. He provided with supportive therapy and medicated with enoxaparin and amantadine. The long-term outcome as evaluated using the Glasgow Outcome Scale was a vegetative state.

In terms of the etiology, numerous drugs (antibiotics, nonsteroidal anti-inflammatory drugs (NSAIDs), anticoagulants, corticosteroids, anaesthetics, and contrast media) can induce KS [2]. One study of 51 KS cases reported to the International Pharmacovigilance Agency from 2010 to 2014 showed that NSAIDs, antibiotics, and epinephrine were the most common causative agents [1]. In this report, even though the patient had already received other drugs including bupivacaine and ceftriaxone during the procedure, signs of coronary vasospasm and anaphylactic reactions occurred immediately after the intravenous administration of midazolam; therefore, this drug was accepted as the most suspected trigger agent. KS triggered by benzodiazepines is considered to be rare. Actually, until now, there has been only one published report of midazolam-induced KS [4]. The tryptase levels were measured in this patient and consistent with an allergic reaction, but a skin testing to identify the causative agent was not performed because of the patient's status.

Our case also showed that the procalcitonin level was first markedly elevated at 62 ug/L (our laboratory reference values state that a measurement below 0.5 ug/L makes sepsis unlikely, whereas measurements of greater than 10 ug/L are almost exclusively secondary to sepsis/septic shock), and then, it returned to the baseline value spontaneously (Table 1). One recent systematic review showed procalcitonin to have a sensitivity of 80% and a specificity of 77% for identifying septic patients [5]. Moreover, procalcitonin has been previously described to be elevated in multiple organ dysfunction syndrome, trauma, severe pancreatitis, rhabdomyolysis, post-myocardial infarction, hypovolemic and cardiogenic shock, and burns [6,7]. In addition to these, in recent years there has been an increasing number of case reports presenting with elevated procalcitonin levels in association with anaphylaxis, implying its potential role as a biomarker [8]. To our knowledge, this is the first case of elevated procalcitonin reported in the setting of KS. Additional studies should be done to further evaluate the role of procalcitonin in hypersensitivity reactions.

A differential diagnosis should be considered such as the perioperative coronary artery vasospasm related to spinal anaesthesia-induced hypotension. The most cases of cardiac arrest after regional anaesthesia presents with initially bradycardia or asystole due to sympathetic block and usually associated with the high level of the spinal blockade, leading to cardiac sympathetic block. Raised serum tryptase, histamine, cardiac biomarkers, cardiac troponins, and Ig E levels are particularly helpful markers in the differential diagnosis of KS [2]. The probability of hypersensitivity reaction is increased in the presence of elevated serum tryptase and plasma histamine levels. The approximate half-life of tryptase is 2 hours [9]. After peaking, the net increase of tryptase begins to decline and returns to baseline by 8 to 10 hours. Likewise, our patient's blood analysis showed an initial elevation of cardiac enzymes (peak troponin I of 46200 ng/L) and serum tryptase levels with the subsequent decline of both value, supporting a severe event of KS. In addition to blood markers, midazolam related discomfort during previous surgery and new erythematous rashes during CPR also supported us to diagnose midazolam-induced KS.

Epinephrine is the cornerstones of perioperative anaphylaxis treatment in all of the published national anaphylaxis guidelines [9,10]. Secondary treatment includes the administration of corticosteroids and antihistamines [10]. However, physicians should take into account both cardiologic and allergic factors in the management of KS, and they should consider that some drugs used to treat coronary syndrome may aggravate an anaphylactic reaction and vice versa. A recently proposed treatment for type I variant KS includes: Intravenous corticosteroids, H1, and H2 antihistamines, and vasodilators in order to remove the vasospasm of the coronary arteries if the blood pressure is satisfactory [2]. In this case, based on the clinical findings, we first treated the hypotension with an intravenous ephedrine bolus and fluid administration due to our initial diagnosis of spinal-induced hypotension. However, ST elevations were observed on the ECG within minutes, which helped us to consider a KS diagnosis. We administered dexamethasone and epinephrine intravenously while skipping antihistamines and vasodilators because of the patient's low blood pressure.

In conclusion, we have presented the case of an elderly man who experienced an allergic reaction triggered by midazolam, accompanied by coronary syndrome with an absence of lesions in the coronary arteries. This was defined as KS type I. KS is becoming increasingly reported, possibly reflecting an increased awareness of this syndrome. The most commonly reported cases have occurred with antibiotics and NSAIDs, with very few cases having been shown to be related to benzodiazepines.

Written informed consent for the publication of this case was obtained from the patient's family. No external funding or competing interests to declare.

© 2021 Arslan B. This is an open-access article distributed under the terms of the Creative Commons Attribution License, which permits unrestricted use, distribution, and reproduction in any medium, provided the original author and source are credited. 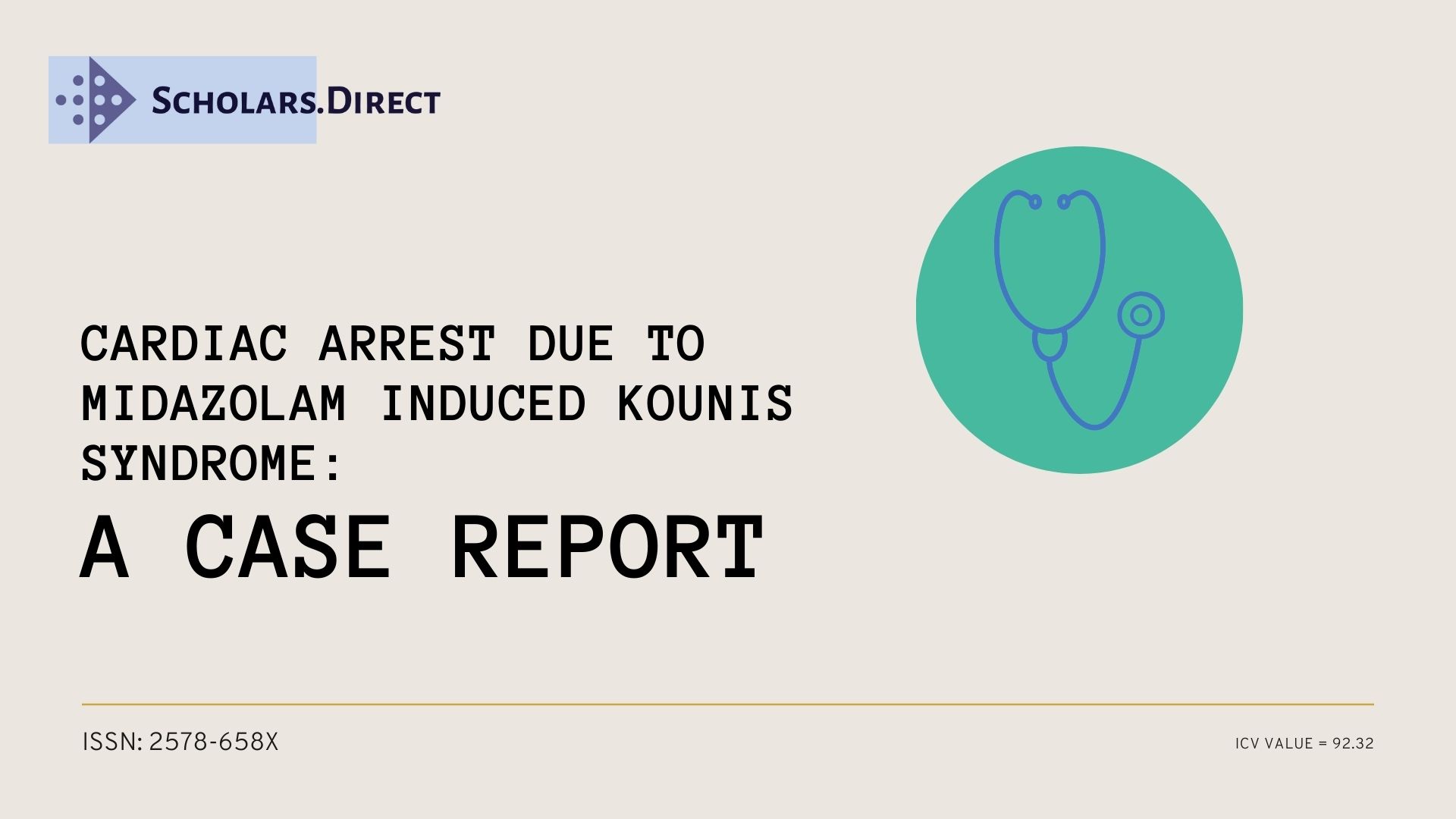