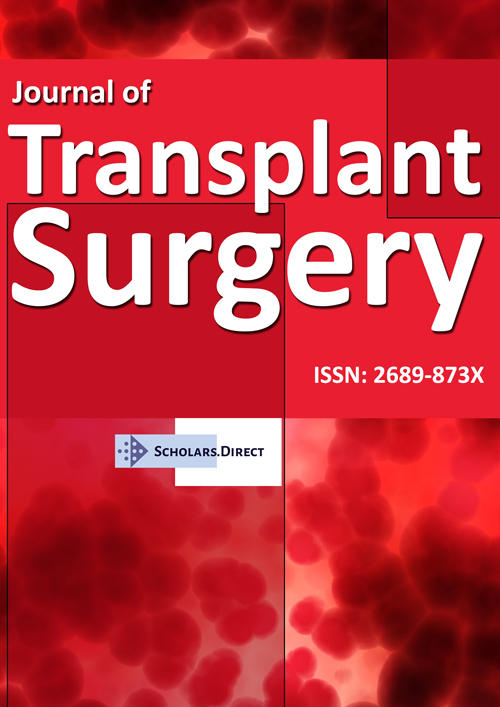 We compare the 5-year outcomes of induction therapies with methylprednisolone (n = 58), basiliximab (n = 56) or alemtuzumab (n = 98) in patients with DGF. Maintenance was tacrolimus and mycophenolate with prednisone in methylprednisolone and basiliximab groups or without prednisone in alemtuzumab group. Protocol biopsies were performed in all patients.

Alemtuzumab induction decreases AR rate in kidney transplant patients with DGF and can improve long-term graft survival in comparison to other induction therapies.

Delayed graft function (DGF) after kidney transplant is usually defined as the need of dialysis support in the first post-operative week [1-3]. DGF is predominantly caused by ischemia-reperfusion injury (IRI). The severity of IRI varies, which affects the quality and function of allograft [1,2]. DGF not only prolongs the hospital stay, increases the financial cost of care, it is also associated with poor graft function, inferior graft survival and patient survival [1-6].

Interestingly, DGF also increases the risk of acute rejection (AR) [7-9]. The development of AR in the setting of DGF is usually "silent", as the patients remain dialysis-dependent. It can only be diagnosed by serial protocol biopsies. Without timely recognition and appropriate treatment, AR would contribute to the poor outcome associated with DGF [5,7,10]. Successful prevention and/or treatment of AR can decrease the risk of graft loss. However, the ideal immunosuppressive regimen for patients with DGF has not been established and the selection of the optimal induction agent remains speculative [11-19]. Current induction agents include methylprednisolone, interleukin-2 receptor (IR2R) antibody (basiliximab) and lymphocyte-depleting antibody (antithymocyte globulin and alemtuzumab). Previously, we reported a 1-year comparison study of three different induction agents, methylprednisolone, basiliximab or alemtuzumab in patients with DGF [20]. We found that alemtuzumab induction was associated with the lowest risk of AR and probably a better graft survival. The aim of this study is to compare the long-term (5-year) results of the three induction therapies in kidney transplant patients with DGF.

As stated in our previous report, patients were identified using the transplant center database at Tulane University Hospital & Clinic [20]. From 2006 to 2013, there were consecutive 573 adult patients who underwent a primary kidney transplant from deceased donors. Among them, 212 (37%) had DGF and were included in the study. These patients were divided into three groups according to their induction therapies. There were 58 patients in methylprednisolone (steroid) group, 56 patients in the basiliximab group, and 98 patients in the alemtuzumab group. Those excluded from this study were also described in our previous report [20]. Our protocol for patients with DGF included a kidney biopsy before patients were discharged home after the transplant surgery. Serial protocol biopsies were subsequently performed every 2 to 4 weeks until either graft recovered function and dialysis was discontinued or graft was deemed primary failure after 3 months of transplant. Kidney biopsy was typically performed with the real-time ultrasound guidance. Bard monopty disposable core biopsy instrument kit with the needle size of 18 g × 20 cm was used under local anesthetic.

From 2006 to 2010, methylprednisolone or basiliximab was used as induction agent and all patients received the traditional triple-maintenance of tacrolimus, mycophenolate and prednisone. In 2011, our program changed the immunosuppressive protocol, and alemtuzumab was used as induction antibody in order to adopt a contemporary early steroid-withdrawal. The details of our immunosuppressive protocols, diagnosis and treatment of AR as well as infection prophylaxes were described in the previous report [20].

Table 1 summarizes the patient demographic characteristics at the time of transplant. There was no significant difference between the 3 groups in terms of patient age, gender, race, body mass index (BMI), the causes of ESRD and ECD. However, the basiliximab group had a higher peak PRA and longer CIT when compared with steroid group or alemtuzumab group.

There were significant differences in the incidences of biopsy-confirmed and clinically-treated AR among the 3 groups, and the 5-year cumulative incidences of AR were 39.7%, 28.6% and 20.4% in steroid, basiliximab and alemtuzumab group respectively (Figure 1; log rank p = 0.034). When comparison was performed between each 2 groups, statistical significance was detected between steroid and alemtuzumab groups (39.7% vs. 20.4%, p = 0.015). The incidence of AR also trended (but not statistically) higher in steroid group than basiliximab group (39.7% vs. 28.6%, p = 0.34), and in basiliximab group than alemtuzumab group (28.6% vs. 20.4%, p = 0.29). The types of AR in each group were summarized in Table 2.

The risk factors for AR in patients with DGF were examined by multivariable logistic regression analyses. We modeled AR as dependent variable and all other factors (including age, gender, ethnicity, peak PRA, HLA mismatch, CIT, ECD, BMI, causes of ESRD and types of induction) as independent variables. A stepwise variable selection method was used for testing risk factors of AR. The identified significant factors are listed in Table 3. Not surprisingly, black ethnicity was found as a significant risk of AR (HR 3.02, 95% Cl 1.08-9.30; p < 0.001). When steroid induction was used as control, we found that basiliximab induction was associated with lower risk of AR (HR 0.67, 95% Cl 0.20-0.97; p = 0.023), and this was also true for alemtuzumab induction (HR 0.36, 95% Cl 0.13-0.85; p = 0.036).

The incidence of DGF is rising as transplant programs increasingly use kidneys from ECD and donation after circulatory death [1-5]. The deceased donor kidney is subjected to injury at every step along the path from donor death, prolonged ischemic time to reperfusion injury [1-3]. IRI is an acute non-specific inflammatory process. This innate immune response can however, activate an adaptive immune response by up-regulating the expression of adhesion molecules, cytokines and HLA. It can also increase antigen presentation to T-cells, therefore, promote allo-sensitization and increase the risk of AR [1,2,21-23]. Qureshi F, et al. reported that AR was very common in kidneys with DGF (57.2%) compared with kidneys without DGF (15.1%). The risk of graft loss from AR was 2.91 (HR, 95% CI 1.60-5.27, p = 0.0004), and much of the reduced graft survival could be explained by the development of silent AR, which could only be detected by protocol biopsy [7]. Arias M also reported high incidence of AR in patients with DGF (47%), presensitization increased the risk of DGF and both together led to the worst graft survivals [24]. High incidence of AR in patients with DGF contributes to their poor outcomes including graft dysfunction, graft loss as well as patient death [4,6,8,9].

The optimal immunosuppressive protocol for patients with DGF remains speculative. Potent antibody induction theoretically could be beneficial for patients with DGF by suppressing both the innate and adaptive immune responses. The effect of introoperative versus postoperative administration of thymoglobulin induction was studied in deceased donor kidney transplants. Intraoperative thymoglobulin was associated with significantly lower incidence of DGF (14.8% vs. 35.5%, p = 0.05), better graft function and shorter hospitalization [13]. In a randomized control trial, Brennan DC, et al. compared thymoglobulin versus basiliximab induction in deceased donor kidney transplants at high risk for DGF and AR. They found no significant difference in the incidence of DGF (40.4% vs. 44.5%, p = 0.54) between the two induction groups [16].

In the previous short-term study, we reported the 1-year outcome of 3 different induction therapies in patients with established DGF. Compared with steroid induction, antibody induction with either basiliximab or alemtuzumab was associated with significantly lower incidence of AR [20]. In this follow-up study, we found that the 5-year cumulative incidences of AR remained significantly different among the 3 groups (log rank p = 0.034), especially between steroid and alemtuzumab groups (39.7% vs. 20.4%, p = 0.015). There was an obvious trend of better long-term graft survival in alemtuzumab group compared to other two groups, but the difference did not reach statistical significance likely due to small sample sizes (log-rank p = 0.07). Despite of this limitation, alemtuzumab group had a numerically superior 5-year graft survival compared to steroid group (80.6% vs. 65.5%, p = 0.06). When the risk factors for AR were examined by multivariable logistic regression analyses, black ethnicity was found to be associated with significantly higher risk of AR. When steroid induction was used as control, we found that antibody induction with either alemtuzumab (HR 0.36, 95% Cl 0.13-0.85; p = 0.036) or basiliximab induction (HR 0.67, 95% Cl 0.20-0.97; p = 0.023) was associated with lower risk of AR.

In literature, Goncalves LF, et al. reported a short-term study of 148 Brazilians with DGF: 90 of them received basiliximab induction and remaining 58 patients received steroid induction as the control group [14]. Both groups were maintained with triple combination of steroid, CNI and MMF. Compared with the steroid control, basiliximab induction demonstrated a lower incidence of steroid-resistant AR (20.9% vs. 6%, p = 0.017) and AMR (7% vs. 0%, p = 0.038) at 1 year. The 1-year graft survival was significantly higher in basiliximab group than the control group (92.8% vs. 80.4%, p = 0.028) [14]. To our knowledge, this was the only study published by others to compare induction therapies in patients with DGF. Our current report is the first long-term study and our patients are predominantly African Americans (more than 60% in each group) and are at higher risk of AR. More importantly, our study includes a group of alemtuzumab induction with a contemporary protocol of steroid-withdrawal maintenance. Alemtuzumab is a humanized anti-CD52 monoclonal antibody and it produces a profound depletion of both T- and B- lymphocytes. Previous studies suggested that alemtuzumab induction could permit patients to be maintained on unconventional strategies such as steroid-free [25,26] or steroid-withdrawal [27] or low-dose of CNI [26]. The recent Cochrane review also concluded that alemtuzumab was associated with lower risk of AR compared to antithymocyte globulin in the contest of steroid minimization protocols [19]. However, its benefit on patients with DGF has not been reported previously. The initial data from the 3C study suggested no significant difference of the incidences of DGF between alemtuzumab induction and basiliximab induction (30% vs. 24%; OR 1.35, 95% CI 1.00-1.83; p = 0.054). But alemtuzumab induction did reduce the primary outcome of biopsy-proven AR [26]. Both of our short and long-term studies are the first ones demonstrating a protective benefit of alemtuzumab induction in patients with established DGF. In addition, our patients in the alemtuzumab group were maintained on tacrolimus and MMF without steroid, while patients in other two groups received traditional triple-maintenance. Therefore, our data also indicate that with alemtuzumab induction, the contemporary steroid-withdrawal protocol can be successfully used in patients with DGF. Our study is limited by its single center data, relative small sample size and retrospective nature. As the diagnosis of DGF is retrospective in nature, it would be impossible to conduct a prospective and controlled comparison of various induction therapies in DGF. To our knowledge, there is no such prospective study published in literature.

This study was approved by the Institutional Review Board (IRB) of Tulane University.

Informed consent from individual participant is not indicated as it is a retrospective analysis and there is no identifying information about any participant in the article.

© 2018 Zhang A, et al. This is an open-access article distributed under the terms of the Creative Commons Attribution License, which permits unrestricted use, distribution, and reproduction in any medium, provided the original author and source are credited.

We compare the 5-year outcomes of induction therapies with methylprednisolone (n = 58), basiliximab (n = 56) or alemtuzumab (n = 98) in patients with DGF. Maintenance was tacrolimus and mycophenolate with prednisone in methylprednisolone and basiliximab groups or without prednisone in alemtuzumab group. Protocol biopsies were performed in all patients.

Alemtuzumab induction decreases AR rate in kidney transplant patients with DGF and can improve long-term graft survival in comparison to other induction therapies.

Figure 3: Kaplan-Meier analysis of 5-year patient survival. The estimated patient survival was 75.9%, 82.1% and 84.7% in steroid, basiliximab and alemtuzumab groups respectively. The patent survival difference among the 3 groups was not statistically significant (log-rank p = 0.4).