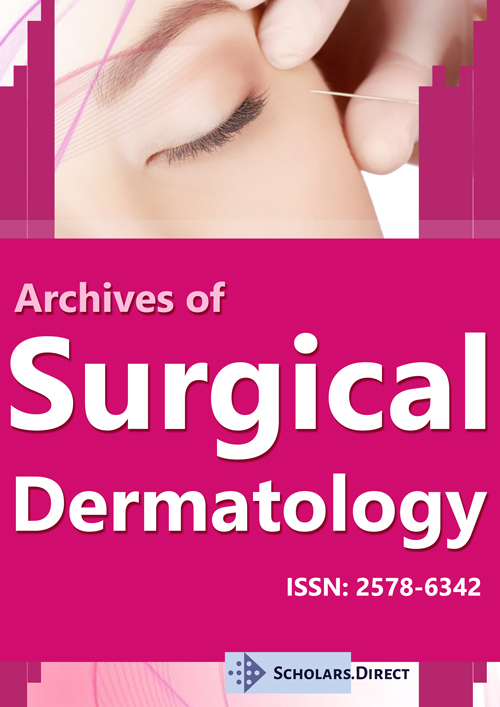 Allergic Contact Dermatitis (ACD) is a substantial health problem, with nickel being the most frequently confirmed allergen on patch testing worldwide. Although case reports have described allergic reactions associated with retained surgical items, such as staples and surgical clips, we report the first case in the literature of potential ACD to nickel in a laparoscopic trocar, which represents relatively limited temporal exposure versus retained products. This case is significant because it suggests that short-term surgical exposure to releasable nickel may have caused an ACD flare in a highly nickel-sensitized patient, which may have implications for the surgical instruments and products utilized in dermatologic surgery for such individuals.

Introduction to Nickel Allergy and the Role of Surgical Stainless Steel

Allergic Contact Dermatitis (ACD) is a substantial health problem, with nickel being the most frequently confirmed allergen on patch testing worldwide [1]. ACD occurs following immunologic sensitization to an allergen to which there has been sufficient exposure. Nickel is a low potential allergen, but prevalence of sensitization is high due to the ubiquity of the metal and the sustained or repeated exposures of prolonged contact (such as is seen from piercing posts in wounded skin) [2]. Numerous studies have documented an association of skin piercing with nickel sensitization [3-8].

The European Union’s (EU) Nickel Directivea currently limits the amount of nickel release from articles in direct and prolonged contact with the skin (e.g. buttons, costume jewelry) to 0.5 µg/cm2/week and to 0.2 µg/cm2/week in metal piercing posts, given the daily contact with compromised skin. It has been demonstrated that materials releasing greater than 1 µg/cm2/week of nickel produce a positive patch test in the majority of a nickel sensitive test group. Conversely, materials releasing nickel at a rate of less than 0.5 µg/cm2/week produced a positive patch test in very few nickel sensitized patients [9]. Thus, the guidelines set forth by the EU do not eliminate the use of nickel entirely, but rather work to sharply minimize the number of patients suffering from nickel allergy. Encouragingly, subsequent to these regulations, a statistically significant decrease in nickel allergy prevalence has been observed in several European countries, although the current prevalence is not negligible [10].

The surgical setting is a noteworthy location in which to consider the risk of eliciting Ni-ACD in sensitized individuals (and the impact on wound repair and healing). Notably, commonly used stainless steel surgical instruments and implants may contain up to 15.5% nickel [11]. It is important to note that it is the rate of release of nickel that is most relevant in ACD and nickel sensitization, not simply the composition of the metal. Low sulfur content stainless steel has high corrosion resistance, resulting in a reduced potential for nickel (and other metal) release from these nickel-containing stainless steels [12]. Austenitic steel is the general class of stainless steel most often used for implantable surgical products, as guided by specific industry standards that incorporate only high-grade, &#8220clean” stainless steel alloys with low sulfur content [11]. Some implantable alloys actually contain up to 15.5% nickel, but their nickel release is low [11]. There is an alternative surgical implant (ASTM F2229 (S29108)) that exists for those patients with a high level of sensitivity to nickel, which has a maximum nickel content of 0.05% nickel and minimal, if any, nickel release [11].

In contrast, some stainless steels (e.g. 303 Steel) have higher sulfur content, resulting in more nickel release than other stainless steels, and this is reflected in higher patch test reactivity with this alloy [12]. Therefore, high sulfur grades are not recommended for use with direct and prolonged contact with the skin. Furthermore, all metals, including nickel, corrode and release more ions under increasingly acidic conditions, so nickel release is expected to be higher in low pH environments. This is relevant when nickel exposure occurs in the presence of sweat, and also in the operating room since some topical iodine-based antiseptics have a pH as low as 5.

Although the EU directive focuses on prolonged exposure to nickel, the question of consequence of relatively shorter intraoperative exposure times remains to be elucidated. A recent study published by Erfani, et al. [13] investigated short, frequent contacts with nickel and the resulting accumulation on intact skin via these encounters. Investigators compared pure nickel, two mixed alloys (CuNi, CuZnNi), and stainless steel. The stainless steel sample used in this study, type 316 L, is an austenitic alloy that features high corrosion resistance and is commonly utilized in surgical instruments and implants [11]. In the study group where people touched new samples of the stainless steel alloy 5 times for approximately 3 seconds, with each touch, up to 0.09 µg/cm2 of accumulated skin nickel content was demonstrated. Under the same circumstances, the group contacting pure nickel displayed up to 32 µg/cm2 [13]. Results from this study provide information on skin exposure to various materials under different short-term exposure scenarios, but the association with clinical nickel dermatitis reactions is not clear. Thresholds for Ni-ACD are measured in longer time periods following sufficient time for absorption of the nickel through the skin and interaction with the immune system [14]. Studies of clinical reactivity associated with shorter and frequent exposures are needed to better understand the risk of Ni-ACD associated with the skin exposure values described in Erfani, et al. [13].

Significance of Surgical Exposures and a Case Report

Case reports have described allergic reactions associated with retained surgical items such as staples, hyfrecators, and surgical clips [15-17]. However, our review of the literature found no reports to date depicting reactions to the trocars used in laparoscopic surgery, which represent an exposure limited to the time of the surgical procedure. Though exposure time varies widely depending on the surgery in question, contact time is limited in contrast to retained products. Despite this temporal limitation, however, we suspect Ni-ACD in the following case given her reported significant prior sensitization to nickel and known reactivity to nickel-releasing items.

A 44-year-old Caucasian female with a known significant history of Ni-ACD (i.e. reported rapid reactivity to nickel-releasing costume-type jewelry within 24 hours) presented 5 days following a laparoscopic appendectomy with a clustered pink papular skin reaction and mild excoriations at a trocar insertion site (Figure 1). Total intraoperative time was 38 minutes. We were unable to acquire the type of trocar used in the surgery to assess the composition, despite provider and patient request from the hospital and surgeon’s office. Steri-Strips had been used in lieu of staples post operatively due to the history of nickel allergy. The patient had noted strict avoidance of any costume jewelry for greater than 5 years, as exposure caused significant and distressing flares of her Ni-ACD.

Patch testing confirmed a 3 + reaction to nickel sulfate 2.5% in petrolatum (ChemotechniqueTM, Sweden) at 48 hours in our patient, which was accompanied by intensification of her trochar-site dermatitis. Notably, the patient did not react to cobalt (a common metal used in alloys [11], and an important allergen to rule out in this case). Furthermore, the Steri-Strip type used post-procedurally was tested for one week and demonstrated no reaction. The patient’s history of reaction to nickel-releasing costume jewelry, the eczematous character and time course of her outbreak, and that trocar compositions are reported to contain stainless steel 303, a high sulfur stainless steel with the potential for significant nickel release, ACD to nickel released from the surgical trocar was suspected. Of note, the Koebner phenomenon has been reported as a response type to standard patch testing on intact skin. Given the isomorphic nature of our patient’s response, degree of skin injury, degree of sensitization and time course, Koebnerized ACD response is a possibility in this patient. She was treated with topical corticosteroids, and the dermatitis resolved.

Our case is significant because it suggests that short-term (approximately 40 minute) surgical exposure to metal may have caused a Ni-ACD flare in a highly nickel sensitized individual. This is not surprising given that prolonged contact is defined as at least 30 seconds of exposure [18]. Moreover, this case indicates the need for awareness of instrument composition and risks of certain instruments in susceptible patient populations. As patients with latex allergy are managed with latex free gloves and products, low nickel-releasing instruments are justified in certain populations with known sensitization to nickel. Extrapolating to the dermatologic outpatient setting, if the contact time with high-release nickel instruments was sufficient there may be a negative impact on healing in nickel sensitized individuals [19].

Nickel is ubiquitous and a common contact allergen, and as such, prevention strategies include appropriate screening and avoidance of high nickel releasing items that may be in direct and prolonged contact with the skin. With respect to preoperative screening, current American Contact Dermatitis Society recommendations do not support routine screening or testing for metal hypersensitivity in preoperative patients [20]. Rather, testing is only recommended for patients with a positive history of cutaneous hypersensitivity reactions to metal. For such patients, patch testing is considered the current gold standard, however, positive patch tests are limited predictors and poorly correlate with postoperative failures of metal implants secondary to nickel sensitivity [21,22]. Hallab, et al. [22] performed an in vitro study highlighting the complexity of the body’s immune response to implanted metal and suggested that lymphocyte transformation testing (measurements of lymphocyte proliferation in blood) may be a more effective test than patch tests (indication of cutaneous T-cell mediated delayed hypersensitivity reaction) for patients requiring metal implants [22]. However, the usefulness of lymphocyte transformation testing in predicting postoperative nickel hypersensitivity reactions to surgical devices has not been well studied [21].

Given the complexities of preoperative evaluation to predict post-procedural nickel hypersensitivities either to implanted metal or to metal devices utilized during a surgical procedure, strategies to minimize the use of high nickel-releasing medical and surgical equipment, including trocars, is fundamental. Nickel spot testing, or the dimethylglyoxime (DMG) test, is a screening tool based on EN 1811 reference methods and useful in estimating nickel release rates in metallic objects [23]. A positive test, demonstrated by a bright pink color on cotton swab applicator, indicates that the metallic item releases > 0.5 µg of nickel/cm2/week. Based on the EU directive, a negative test signifies a safer product since nickel released at these low levels (< 0.5 µg of nickel/cm2/week) rarely produces a positive patch test in nickel sensitized patients [9,23]. DMG testing, in addition to diligent focus on purchasing low nickel release (and low sulfur content) stainless steel products, can effectively optimize the repertoire of instruments in the operating room and minimize post-operative morbidities.

© 2017 Perez C, et al. This is an open-access article distributed under the terms of the Creative Commons Attribution License, which permits unrestricted use, distribution, and reproduction in any medium, provided the original author and source are credited.

Allergic Contact Dermatitis (ACD) is a substantial health problem, with nickel being the most frequently confirmed allergen on patch testing worldwide. Although case reports have described allergic reactions associated with retained surgical items, such as staples and surgical clips, we report the first case in the literature of potential ACD to nickel in a laparoscopic trocar, which represents relatively limited temporal exposure versus retained products. This case is significant because it suggests that short-term surgical exposure to releasable nickel may have caused an ACD flare in a highly nickel-sensitized patient, which may have implications for the surgical instruments and products utilized in dermatologic surgery for such individuals.