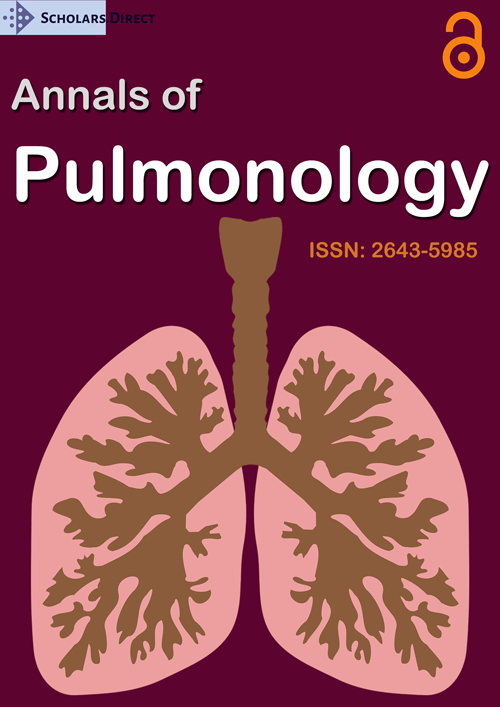 Isolated mediastinal lymphadenopathy can be due to several disorders with the most common being granulomatous disorders and malignancy [1]. It is uncommon to find Amyloidosis as the cause for isolated mediastinal lymphadenopathy and to have it diagnosed via endobronchial ultrasound guided transbronchial needle aspiration (EBUS-TBNA). Subcutaneous fat biopsy and bone marrow biopsy are the most common method for diagnosing Amyloidosis [2]. Amyloidosis is confirmed when tissue biopsies are stained with Congo red demonstrating amyloid deposits with apple green birefringence [3]. Once tissue biopsy is confirmed further testing can be done to differentiate the subtypes of Amyloidosis.

We present a patient with Amyloidosis diagnosed by EBUS-TBNA. A 55-year-old African American man with past medical history of hypertension; was referred for mediastinal lymphadenopathy (Figure 1 and Figure 2) in 2017. The CT chest was performed to evaluate postoperative shortness of breath during recent hospitalization for acute appendicitis. The patient's symptoms improved, and he was discharged home following brief hospital stay. In clinic, he only endorsed symptoms of mild fatigue and night sweats which had improved since his surgery. The patient had normal complete metabolic panel (including normal liver and renal function) and normal complete blood count panel. He had normal exercise tolerance with recent echocardiogram showing relatively normal cardiac function. He underwent an EBUS-TBNA for suspected sarcoidosis without difficulty. Lymph nodes at stations 4L, 4R, and 7 were all sampled. The original sample from lymph node station 4R underwent liquid chromatography tandem mass spectrometry (LC MS/MS) on peptides from Congo red-positive, micro-dissected areas of paraffin-embedded specimens and showed a peptide profile consistent with AL (lambda) type deposition. These samples also underwent Congo red staining (Figure 3) and showed characteristic apple green birefringence pattern when visualized under polarized light (Figure 4). The patient was then referred to hematology where further workup was done for subtype classification. The patient underwent bone marrow biopsy which showed plasma cell dyscrasia with 5% monoclonal lambda plasma cells indicating AL type Amyloidosis. Based on these results with confirmation from bone marrow biopsy fat pad biopsies were not pursued. Cardiac biopsies were also taken as there was concern for cardiac involvement (this was done following echocardiogram showing reduced ejection fraction and cardiac MRI showing findings suggestive of cardiac amyloid). The cardiac biopsy sample also underwent LC MS/MS and confirmed a peptide profile consistent with AL (lambda) type deposition.

In this case the patient presented with isolated mediastinal lymphadenopathy. Given his demographics and his history the adenopathy would most likely be due to reactive inflammation or sarcoidosis [4] and not amyloidosis.

Amyloidosis is a group of heterogeneous diseases caused by extracellular deposition of fibrillar proteins in various organs impairing normal function. These entities can be classified according to their constitutive protein and according to the form of deposits as systemic Amyloidosis or organ-specific Amyloidosis. Systemic AL Amyloidosis caused by Lambda light chain is the most common form in developed countries with reported incidence of 0-3/100,000 [5], other causes of systemic Amyloidosis include; AA Amyloidosis, dialysis-related, age related and familial Amyloidosis. Most common presentation of AL Amyloidosis include renal and cardiac involvement, other include hepatic and Autonomic nervous system involvement. Thoracic involvement can occur in both localized and systemic disease, manifestations include adenopathy, pulmonary nodules, diffuse lung disease, pleural effusions, and laryngo-tracheobronchial disease [6]. The initial presentation of symptoms is often very vague which leads to delay in diagnosis. Organ involvement may not occur until later following disease progression [2].

Diagnosing Amyloidosis is confirmed by tissue biopsy, preferable sites are subcutaneous abdominal fat (Sensitivity 76-90%) [7-9] and bone marrow (sensitivity 49%) [9], sensitivity for both sites combined is 90% [3], if these two sites do not reveal a diagnosis then biopsy of the affected organ is attempted. It is not typical to have isolated hilar and mediastinal lymphadenopathy as presentation of Amyloidosis. Mediastinoscopy and EBUS are both used for lymph nodes sampling, EBUS is a less invasive tool, can be done under local anesthesia, in outpatient settings. A prospective study in a tertiary center in Manchester reported an NPV of 84.2% (95% CI 72.6% to 91.5%) and diagnostic accuracy of 91% for diagnosing isolated mediastinal and hilar lymphadenopathy with EBUS-TBNA [10].

© 2018 Choudhry M, et al. This is an open-access article distributed under the terms of the Creative Commons Attribution License, which permits unrestricted use, distribution, and reproduction in any medium, provided the original author and source are credited.

Figure 3: Protein deposits with Congo Red Stain showing salmon pink color in bright field (Black Arrows) typical for Amyloidosis; Congo red stain applied to the tissue gives the amyloid protein a salmon-pink color. It is when placed under polarized light the amyloid proteins have an apple-green birefringence (As shown in Figure 4).