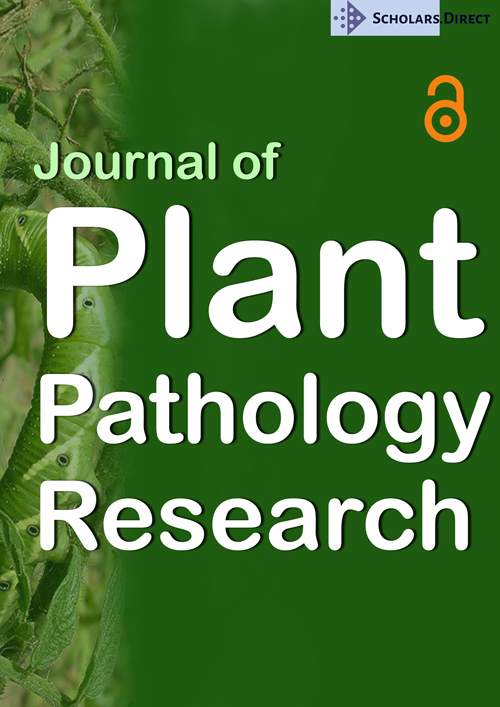 Early blight (EB) caused by Alternaria solani is among the most devastating tomato diseases in Kenya. In this study, we collected 96 A. solani isolates from three counties in Kenya and characterized them using cultural features, conidial morphology, and genetic variation based on the 18S rRNA gene. Most colonies (45%) were greenish-white in colour with diameter ranging between 65.5-85 mm. Most colonies had concentric zonation (63%) and margins were mostly regular (53%). Conidia was ellipsoidal in most isolates (54%) with lengths ranging between 16.72-20.48 µm. Conidial septa ranged from 2-5 (transverse), 1-3 (longitudinal) and 1-4 (beak septa). Analysis of variance indicated that cultural features and conidial parameters only differed significantly by isolate and not by county of origin. Similarly, the UPGMA dendrogram based on the 18S rRNA gene provided no evidence of geographical clustering of isolates. This has been the first study to characterize A. solani isolates from Kenya. Our results indicate that there is a high level of heterogeneity among Kenya's A. solani populations which will have implications for EB management in the country.

Alternaria solani (Ellis and G. Martin) Sorauer is a necrotrophic fungus belonging to order Hyphae and family Pleosporaceae [1-3]. The fungus causes Early blight (EB), which is among the most devastating diseases of tomato and potato worldwide. Plants affected by EB usually develop grey-brown lesions on their leaves, leading to reduction in photosynthesizing surface areas and ultimately, yield losses as high as 79% [4].

In Kenya, EB is one of the major biotic constraints of tomato production and causes significant yield losses in farmers' fields. In managing EB, Kenyan farmers have mainly relied on application of fungicides but there have been many complaints recently, about the declining efficacy of most available fungicides [5-7] and this has provided a need, for reinforcing chemical control with alternative strategies, for example, breeding tomato for EB resistance.

However, with A. solani's high polycyclic nature and variability, durable resistance can only be imparted if tomato breeders have sufficient knowledge about the population of the pathogen in Kenya; and which is currently not available. For example, no study has ever determined the level of morphological and genetic variability of A. solani.

The objective of this study was therefore to characterize A. solani isolates from Kenya by colony characteristics, conidial features, and genetic variability (based on 18S rRNA gene). The 18S rRNA gene has been described as highly conserved at intraspecific level [8], so we hypothesized that the variations in it could give a good picture of the extent of intraspecific variation that has taken place in Kenya's A. solani populations.

Tomato leaf samples with typical early blight symptoms were collected from farmers' fields in three major tomato-producing counties (Kajiado, Kiambu, and Kajiado) of Kenya during the January-April growing season of 2021. The samples (one per field) were packed in zipper-lock bags and transferred to the Plant Pathology Laboratory at Kenyatta University, Nairobi, Kenya.

Isolation of Alternaria spp from diseased samples was carried out following the standard protocol by Schulz, et al. [9]. Briefly, each sample was surface-sterilized in 1% NaOCl for 3 min and rinsed three times in sterilized distilled water for 3 min. Sections of ~ 5 mm2 were cut from the advancing edges of the lesions and plated on freshly prepared PDA media, the petri plates sealed and incubated at 27 °C for 5 days. Subculturing was done for A. solani putative colonies [10], continuously until pure cultures were obtained.

Cultural and morphological characterization of isolates

This was done on 3 replicate cultures of each isolate at 7 days. The characteristics recorded include colony diameter, colour, nature of margin and colony zonation [11]. When the cultures were 3 weeks old, morphological characterization was carried out, following methods by previous workers [11-13].

Using a sterile scalpel blade, small sections of hyphal tips were 'brushed' onto a 1ml drop of sterile distilled water, on a rectangular slide. Such slides were examined under a Zeiss - Primo Star microscope fitted with an AxioCam ERC 5s camera at 40X. The features recorded include conidial parameters (such as shape, length, and width) and number of septa. For analysis, quantitative variables (such as colony diameters and conidia lengths) were subjected to one-way ANOVA while qualitative variables such as colony colours and nature of margins were summarized in form of frequencies and percentages.

Conidial suspensions were prepared from 20 randomly selected isolates according to Stammler, et al. [14] and inoculated onto leaves of three-week-old tomato seedlings of Cultivar 'Riogrande' (3 replicates per isolate). For the control experiment, seedlings were inoculated with sterile distilled water. These tests were conducted under greenhouse conditions in pot experiments. Leaves showing typical early blight symptoms were collected from infected plants, two weeks after inoculation and the pathogen re-isolated to complete Koch's postulates.

DNA extraction and PCR amplification of the 18S rRNA gene

DNA was extracted from mycelial cultures using a Qiagen DNA extraction kit (Qiagen GmbH, Germany) as per the manufacturer's protocol. Two microlitres of purified DNA per isolate were used in 50 µl of PCR mixture.

To confirm amplification, two microlitres of each PCR product were electrophoresed through 1% agarose gel at 100 V for 30 min. A two kilobase DNA ladder was used as a size standard. After electrophoresis, the gels were visualized under a UV transilluminator. PCR products were then cleaned by ethanol precipitation [15] and sent to Macrogen Inc. (Netherlands) for sequencing.

Bioinformatics analysis of the sequences

(https://blast.ncbi.nlm.nih.gov/Blast.cgi?PROGRAM=blastn&PAGE_TYPE=BlastSearch&LINK_LOC=blasthome). Phylogenetic analysis was then performed in MEGA7 software [16] by construction of a phylogenetic tree (using UPGMA method) to resolve relationships among the isolates.

Initially, the mycelia in all cultures were profuse and hyaline but turned grey to brown, septate, and branching as they grew. Isolates exhibited significant variation in cultural features (colony diameter (P = 0.031), colony colour (P = 0.029)) though this variation was not significant when isolates were grouped by county of origin (Table 1). Isolate KYG24 from Kirinyaga had the highest recorded colony diameter at 85 mm while KJD18 from Kajiado had the lowest colony diameter at 65.5 mm.

Regarding colour, most colonies (45 of 96 or 45%) were greenish-white, 22 were creamish-white, 10 green and 1 grey. On reverse plate, most colonies were pigmented creamish white (49 out of 96), greenish-brown (42) and brown (5). About half (55.2%) of the isolates had irregular margins and majority (62.5%) of isolates had concentric zonation (Figure 1). These results are in agreement with previous studies about the high variability in cultural features among A. solani isolates. However, since cultural characteristics in fungi are often affected by many factors e.g media used and incubation temperature [17], we only used them for initial screening of Alternaria spp and did not infer much about them for characterization of the pathogen.

In all cultures, hyphae were hyaline and relatively thick (4.41 - 4.44 µm diameter). Conidiophores were 200-230 µm, flexuous or straight, and were either solitary in many isolates or in small groups in a few others. At apices, conidiophores enlarged slightly with scars indicating points of conidia attachment. Conidia were pale to olivaceous-brown, borne singly or in short chains, on conidiophores. They were straight, or slightly flexuous tapering to a beak in most isolates or flat-ended in others.

These results indicate a high level of morphological variability among Kenya's A. solani isolates as has been reported in other studies [12,18,19]. However, this variation was not significant at county of origin level, which confirmed existence of morphological heterogeneity among A. solani isolates even when they were isolated from the same geographical area/agroclimatic zone.

Symptoms started to appear 3 days after spraying the A. solani inoculations. Brown, irregular spots (2-4 mm in diameter) with concentric zonations at the center, appeared on leaves. In some cases, the spots enlarged in size reaching up to 10 mm in diameter in the second week after inoculation. Re-isolated cultures from infected leaves had close similarity with inoculated A. solani isolates in terms of cultural and morphological features. This confirmed the pathogenicity of the tested isolates on tomato as per Koch's postulates.

The two primer pairs amplified an ~ 1600 bp fragment of 18S rRNA gene in each A. solani isolate. Trimmed DNA sequences, ~ 1500 bp long were obtained for Kirinyaga (n = 35), Kiambu (30), and Kajiado (31) counties. In the GenBank database, sequences showed high percent similarities (98-99.5%) with Alternaria solani accession No. KC478609.1. This served as the final confirmatory step for Alternaria solani.

During phylogenetic analysis, three distinct clusters (containing 24, 27, and 45 isolates, respectively) were formed (Figure 2). In agreement with previous studies in other areas [20,21], the isolates in the present study did not cluster according to the county of origin.

This finding confirms presence of genetically heterogeneous A. solani isolates in similar geographical regions in Kenya and may mean that the pathogen population in the country has a high adaptive potential to its environment. The same trend has been reported in A. solani populations in other countries such as Germany [22], India [23], and Brazil [24]. With this genetic variability, A. solani in Kenya may easily challenge EB management programs in Kenya by evolving resistance to fungicides and/or overcoming host resistance to early blight. Continuous monitoring of A. solani populations in Kenya especially through studies on pathogenic variability and sensitivity to fungicides will therefore provide an important knowledge base for improvement of EB management practices in the country.

This study characterized Alternaria solani isolates from tomato in Kenya and revealed that the isolates differed significantly in cultural characteristics, morphological features, and phylogenetically, based on the 18S rRNA gene. This finding will have implications for Early bight management in Kenya.

All data supporting the findings of this study has been included in the manuscript and its supporting files.

The authors are grateful to the agriculture departments of Kirinyaga, Kiambu, and Kajiado counties for collaboration during sample collection. This study received funding from the National Research Fund, Kenya (Grant title: ENABLE-HORT) and the authors appreciate this support.

The authors declare that there were no competing interests.

M.M and S.R conceptualized the study and obtained funding. A.M.N collected the data and wrote the draft manuscript under guidance by M.M and S.R. All authors read and approved the final manuscript for publication

© 2022 Nuwamanya AM, et al. This is an open-access article distributed under the terms of the Creative Commons Attribution License, which permits unrestricted use, distribution, and reproduction in any medium, provided the original author and source are credited.

Early blight (EB) caused by Alternaria solani is among the most devastating tomato diseases in Kenya. In this study, we collected 96 A. solani isolates from three counties in Kenya and characterized them using cultural features, conidial morphology, and genetic variation based on the 18S rRNA gene. Most colonies (45%) were greenish-white in colour with diameter ranging between 65.5-85 mm. Most colonies had concentric zonation (63%) and margins were mostly regular (53%). Conidia was ellipsoidal in most isolates (54%) with lengths ranging between 16.72-20.48 µm. Conidial septa ranged from 2-5 (transverse), 1-3 (longitudinal) and 1-4 (beak septa). Analysis of variance indicated that cultural features and conidial parameters only differed significantly by isolate and not by county of origin. Similarly, the UPGMA dendrogram based on the 18S rRNA gene provided no evidence of geographical clustering of isolates. This has been the first study to characterize A. solani isolates from Kenya. Our results indicate that there is a high level of heterogeneity among Kenya's A. solani populations which will have implications for EB management in the country.

Figure 2: Phylogenetic tree constructed between 96 Alternaria solani isolates from Kenya based on the 18S rRNA gene in MEGA7 software. The minimum bootstrap frequency used during analysis was 1000.