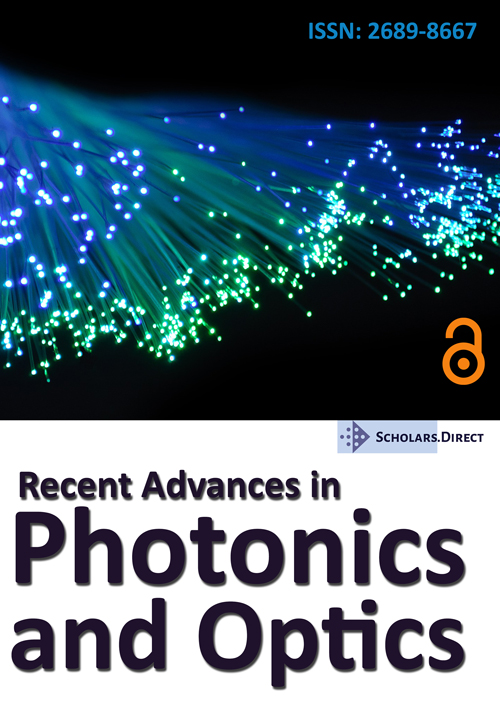 The new multi-pass configuration of side-pumped Nd:YAG solar laser for enhancement of conversion efficiency is studied by computer simulation of the laser system. The active medium in the form of a slab providing effective heat dissipation during side pumping by concentrated solar radiation at the focus of a parabolic concentrator with a diameter of 1 m is considered. It is shown that multi-pass configuration doubles the output laser power.

The conversion of broadband sunlight into laser light by direct or indirect solar pumping is of potential importance because the laser light is a narrowband, collimated and easy to control radiation with the possibility of obtaining extremely high intensity. The potential use of solar-pumped lasers could be spanned over wide terrestrial and space applications such as, for instance, asteroid deflection [1], relativistic propulsion using directed energy [2], mitigation and remediation of the space debris problem [3], wireless power transmission of solar energy from space [4], laser acceleration of proton and ion beams [5], fast ignition by laser generated proton beams [6], inertial laser fusion [7], laser driven neutron sources [8], materials science [9,10], production of long-life betavoltaic nuclear batteries [11] in a cost-effective manner using solar power and so on. In other words, most of the existing or being developed electrically driven laser technologies, for which there is necessity for scaling up and thereby high energy consumption, could be realized with the lasers powered by solar energy, by creating large-scale plants generating laser power. However, to do this, it is necessary to solve some problems of solar-pumped lasers at first. The main of them is their low efficiency. The next less explored important issue which also needs to be solved is the possibility of scaling of solar pumped lasers. This paper mainly addresses the main problem of solar-pumped lasers - the problem of efficiency. However, the problem considered here will partially touch the issue of scalability as well.

Solar lasers have been studied since 1963 and since then quite a lot of efforts have been made to increase the conversion efficiency, but the results are still low for widespread use of solar lasers. Therefore, omitting the literature review, here we present only the latest achievements that we need to compare. Thus, the maximum result for laser power from one square meter of 32.5 W/m2 was obtained in Ref. [12] using a combined end-side pumping scheme which corresponds to an efficiency of about 3%, if we assume that the solar radiation intensity on the Earth's surface is ~1000 W/m2. For the side-pumping scheme, the maximum result was 17.0 W/m2 according to Ref. [13], which is about 1.5 times less than the result for a combined pumping scheme. For the increase the efficiency we proposed a new approach in [14,15] which based on the use of external sensitizers (solar spectrum frequency converters) for both of end- and side-pumping schemes. By means of simulation calculations it was shown the possibility of increase the pumping efficiency up to 33% in the case of pure end-pumping scheme and 15% in the case of side-pumping that is the side-pumping scheme was less efficient. Therefore, here, continuing those studies we propose a new way for the further increase the efficiency of side-pumping scheme. The advantages of the proposed approach are demonstrated by the example of the Nd:YAG active medium, but without external sensitizers [14,15], in order to show the contribution of the proposed approach to the efficiency increase in its purest form.

In laser systems, mainly two types of pumping schemes are used - end-pumping and side-pumping schemes. The end-pumping scheme is considered to be the most effective, but the side-pumping scheme provides a more uniform absorption along the rod axis inside the laser medium, thereby reducing the associated problems of thermal load. The beam quality of solar laser with configuration of side-pumping may be better than the configuration of the end-pumping. It is also believed that side-pumping scheme is more convenient than end-pumping scheme for scaling purposes. However due-to that transversal sizes of active medium are much less than longitudinal size absorption efficiency in side-pumped lasers is usually two or more times lesser than that of end-pumped lasers. Therefore, in order to increase the absorption efficiency of side-pumped lasers, either highly doped active media or retro-reflection approaches are used in diode-pumped solid-state lasers. In lamp or solar pumped lasers realization both of these approaches are problematic because for example in the case of neodymium doped active medium which is one of the mainly used active media in solar pumped lasers the concentration of neodymium ions are limited by concentration quenching. On the other hand due to that concentrated solar radiation cannot be as parallel as diode laser beam, providing effective multi-pass pumping was also difficult. To this end in this paper we propose a new, simple approach for the increase the absorption efficiency of side-pumped solar lasers which allows providing multi-pass pumping as effective as a multiple pass absorption technique (retroreflector) in thin-disk lasers [16,17]. The approach proposed is simple. It is based on the use of a special pump chamber (cavity) with silver coated internal walls. The pump chamber is a rectangular box whose front wall plays the role of a retroreflector, which is the main difference from the existing pump cavities used in solar lasers with side-pumping. Another distinctive feature of the pump cavity is that it also plays the role of a homogenizer (metallic light-guide), which ensures a uniform distribution of the pump along the length of the active medium. The front wall has a window through which the concentrated solar flux at the focal plane of the concentrator (parabolic dish or Fresnel lens) is entered into the pump cavity. The schematic diagram of multi-pass pumping approach is presented in Figure 1.

The purpose of this study was to show how the presence of the front wall (retroreflector) affects the efficiency of side-pumped laser. In this connection, the Nd:YAG active medium in the form of a slab was investigated, with and without use of retro-reflector (front wall with the entrance window) in side-pumping conditions by concentrated solar radiation of parabolic concentrator with a diameter of 1 m as shown in Figure 2. As it is shown in the figure, concentrated solar radiation at the focus of a solar concentrator is introduced through 10 × 10 mm2 window into the metallic light guide - a pump chamber that provides uniform pumping by multiple reflections of the solar radiation inside the chamber. The internal walls of the pump chamber are assumed to be silver coated the reflection coefficient of which is about 97%. The working dimensions of the Nd:YAG active medium are 50 × 8 × 4 mm3. The use of slab geometry is due to the fact that, firstly, such a form, unlike a rod-shaped form, does not change the angle of the beam relative to the axis of the concentrator upon reflection from its surface and, secondly, provides effective cooling due to the larger surface-to-volume ratio. Internal dimensions of pump cavity were 50 mm in width, 40 mm in length and 10 mm in height. A computer simulation was carried out within the framework of the Monte-Carlo ray-tracing simulation method described in [14] to determine the efficiency of absorption of solar radiation by the active medium, for the considered configuration. A MATLAB© simulation model was designed for this system to test its performance limits and to compare them with the laser output in the cases of using Nd:YAG crystal with and without retro-reflector. The model is completely statistical, since we consider all processes including reflection and refraction as random processes. In the model, we use standard solar spectrum [18] to determine the wavelength of generated solar photons. The wavelength is considered as a random variable with non uniform probability density defined as

Where is the spectral intensity [W/m2/nm] of the AM1.5 solar radiation at a given wavelength [nm] and according to probability theory we determine by numerical solution of following integral equation:

Where is the random number uniformly distributed over [0,1].

To determine the absorption coefficient for the given wavelength, the entire Nd: YAG absorption spectrum was used. Then the path length was determined and the reflection, refraction, and absorption processes were simulated by determining the intersection points using geometric optics. For details of remained parts of the model we refer to our preceding work [14].

Figure 3 demonstrates the distribution of absorbed photons inside the 50-millimeter active medium along its length for the configuration with retroreflector. The distribution is almost uniform within statistical fluctuations, which can be reduced with an increase in the number of photons considered.

Thus in the first stage as a result of Monte-Carlo ray-tracing simulations the pumping efficiencies for both of two cases (with and without retro-reflector) were calculated, which were about 8.5% and 6.0% respectively. The pumping efficiencies further were used at the next stage for calculations of dependences of an output power of laser radiation on the input solar power by the use of known expression for the four - level laser [19]:

As the results show, the presence of the front wall - retroreflector increases the laser power by almost two times compared to the configuration without retroreflector. The output laser power in this case is more than 30 W, and the corresponding collection efficiency can be about 40 W/m2 for solar intensity ~1000 W/m2 higher than record power of 31.5 W/m2 [12], obtained for end-side pumped scheme of solar laser. To further increase the efficiency, Nd:Ce:YAG [20] or external sensitizers [15] can be used.

A new simple approach for realization of multi-pass pumping for side-pumped solar lasers is proposed.

The use of proposed scheme increases the overall efficiency by almost two times, provides best thermal conditions for active medium in operation and for the use of external sensitizers.

The proposed configuration due to multi-pass pumping may also allow the use of other laser materials with relatively low thermal conductivity and which are currently considered unsuitable for pumping with concentrated solar radiation to date.

Moreover, it also allows side - pumping of fiber bundles or thin active media with low thermal conductivity, the creation of a multi-color laser by simultaneously pumping of different active media. In other words, it opens up broad opportunities for creating a new generation of high-performance solar-pumped lasers.

© 2019 Payziyev SH, et al. This is an open-access article distributed under the terms of the Creative Commons Attribution License, which permits unrestricted use, distribution, and reproduction in any medium, provided the original author and source are credited.

The new multi-pass configuration of side-pumped Nd:YAG solar laser for enhancement of conversion efficiency is studied by computer simulation of the laser system. The active medium in the form of a slab providing effective heat dissipation during side pumping by concentrated solar radiation at the focus of a parabolic concentrator with a diameter of 1 m is considered. It is shown that multi-pass configuration doubles the output laser power.

Figure 3: Distribution of absorbed photons along the active medium with dimensions of 50 × 8 × 4 mm3 for the 50 mm width, 40 mm long and 10 mm high pump cavity. The number of considered photons here is 105.