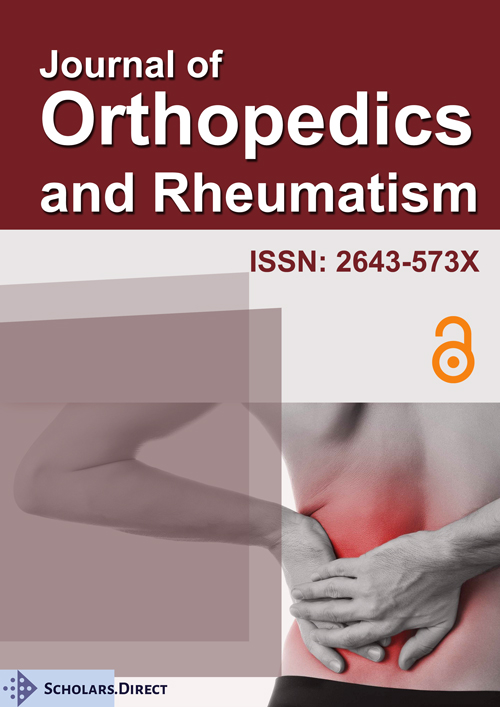 Scapula fractures are relatively rare. Those that affect the body of the scapula account for approximately 50% of all scapula fractures. The indication of surgical treatment in the fractures of the body of the scapula is controversial. One of the indications for surgery is the intrathoracic displacement of a bone fragment. Within the low incidence of this complication, homogeneous anatomical patterns always related to high energy trauma have been described.

We present a case of fracture of the body of the scapula that required surgical treatment due to intrathoracic displacement of a bone fragment related to a low energy trauma, representing an anatomical pattern not described in the literature previously.

The surgical indication in scapula body fractures using criteria of anatomical deformity is controversial [4]. Only in the presence of complications such as open fracture or neurovascular injury, the indications are clearer.

An unusual complication that implies a surgical indication in these fractures is the intrathoracic displacement of bone fragments. This condition is rare, especially in adults, and has been described occasionally in the bibliography, presenting well-defined fracture patterns [5-8]. In this case report, we describe a clinical case of scapular body fracture, as an isolated injury, with intrathoracic penetration of a fracture fragment with a morphology not previously described and which, in addition, occurs after a low energy trauma.

A 32-year-old male is referred to our center, from an emergency service at a sky center, after an accident practicing snow board. He described a low energy trauma, falling from his height in abduction of his left shoulder while he was snowboarding downhill at low speed. He had pain in his left shoulder and functional impairment. In the physical examination the patient focused the pain on the distal clavicle, with local deformity at the acromioclavicular (AC) joint, and elevation of its distal end. He also presented diffuse pain on trapezius muscle. Neurovascular exploration was described as normal.

The patient had no medical-surgical history of interest, except a fracture of the contralateral clavicle that was operated 18 months ago and healed uneventfully.

In the emergency department (ED) a simple AP shoulder x-ray was performed, a grade III AC dislocation was diagnosed associated with a non-displaced longitudinal fracture of the body of the scapula (Figure 1A and Figure 1B). Chest X-Ray was also obtained, and reported as normal. Presented in clinical session, orthopedic treatment was decided prescribing a sling.

CT scan showed a partial longitudinal fracture of the lateral edge of the scapula, with the lateral proximal fragment introduced between the third and fourth ribs, without lung injuries, or associated rib fractures. The medial border of the scapula presented continuity throughout its length. The AC joint presented only a mild displacement.

Surgical intervention was decided, in collaboration with thoracic surgeons. With the patient in lateral decubitus, a dorsolateral thoracotomy was performed by an incision parallel to the lower angle of the scapula. The latissimus dorsi muscle was partially sectioned, dissecting the anterior serratus to locate the intrathoracic fragment of the scapula, which was in the third intercostal space with no rib fracture associated. The collapse of the lung was performed by anesthesia team, extracting the fragment in maximum abduction of the shoulder and bone traction. The AC joint deformity was reduced after fragment extraction. Despite the fact a lung injury was not observed, a thoracic drainage was placed in the 5th intercostal space, in the middle mamillar line, closing the third space by pericostal cerclage to diminish the possibility of recurrence.

The cranial fragment of the lateral border of the scapula that presented the intrathoracic displacement was of a limited thickness and showed a tendency to reintroduce itself into the defect of the thoracic wall with the scapulothoracic movements. So with these findings it was decided to resect this fragment. On the other hand, the caudal fragment of the lateral border did not show the capacity to enter the chest wall gap and was regularized. Since the scapula fracture was incomplete and showed good stability, osteosynthesis was not considered necessary, obtaining a complete range of motion of scapulothoracic joint. Wound closure was performed and the arm was placed on a sling in a neutral position.

The immediate postoperative period had no incidences. The AC joint presented only a moderate deformity and the patient tolerated the onset of mobility without pain. The thoracic drainage was removed after 48 hours. Passive and assisted mobilization of the shoulder was allowed 24 hours after surgery. Preoperative shoulder lock and pain were reversed, and the AC joint anatomy was restored.

After eight weeks, the fracture was radiologically healed. He resumed sports activity at three months. At 6 months the patient had no limitation for his work or sports activity, and in the physical examination the shoulder and scapulothoracic ranges of motion were comparable to the opposite upper limb (Figure 3A and Figure 3B).

Scapula fractures are report as rare in the literature. They have been shown to occur with a rate of 1% of all fractures, 5% of the shoulder girdle.

These injuries are typically associated with high energy trauma. 96% of the scapula fractures have other injuries involved [1-3], being rib fractures and lung injuries the most commonly injuries associated [2,3].

Surgical indication based on their morphology has been developed during the last years. Some surgical criteria like medialization > 20 mm, angular deformity ≥ 45º on a scapular Y shoulder radiograph and a glenopolar angle < 22º, have been proposed to improved functional results [4]. On the other hand, we still don´t have enough scientific evidence regarding surgical indication. Zlowodzki, et al. published a large series (more than 500 cases), where 99% of these fractures where body scapula fractures treated non-operatively, finding good results in 86% of cases [9,10]. Thus, the surgical treatment of these fractures should be individualized, and not only be based on deformity parameters [9,10].

The case presented in this case report has some differences from other published cases.

It is remarkable that this patient had a low energy trauma, compared to the rest of the patients in other case reports, who suffered traffic accidents. The absence of associated injuries should be noticed as well, as the other cases had also thoracic injuries. The only associated injury in this case was a AC dislocation, probably associated with the initial displacement of the fracture, as the joint was spontaneously reduced after fragment extraction.

Finally, the intrathoracic fragment was the lateral fragment of the proximal segment, in contrast with the other cases published in adult population.

The delay in diagnosis of intrathoracic displacement is significant in the present case. This delay has been described previously [5], and it is associated to the low sensitivity of plain x-rays to evaluate the intrathoracic displacement of the scapula. It is also notable the importance of clinical findings, as scapula elevation or the scapulothoracic movement blocking. Despite there are several scapula x-ray studies described, the gold standard in diagnose scapula fractures and their complications is the CT scan.

The recommended treatment of these cases is also varied. Despite the surgical treatment is indicated, there has been described cases of closed reduction, open reduction through Judet approach or even thoracotomy. We cannot stablish conclusions regarding the best treatment option, but in case of delayed diagnosis, and following a previous report, we decided to perform a thoracotomy in order to treat the possible complications extracting the intrathoracic fragment [5]. Only one case previously published required fracture osteosynthesis. In our case, after reducing the dislocation, the partial resection of the fragment restored the normal scapulothoracic movement, and no other surgical technique [6] was needed regarding the scapula fracture fixation.

© 2019 Auñón-Martín I, et al. This is an open-access article distributed under the terms of the Creative Commons Attribution License, which permits unrestricted use, distribution, and reproduction in any medium, provided the original author and source are credited.

Scapula fractures are relatively rare. Those that affect the body of the scapula account for approximately 50% of all scapula fractures. The indication of surgical treatment in the fractures of the body of the scapula is controversial. One of the indications for surgery is the intrathoracic displacement of a bone fragment. Within the low incidence of this complication, homogeneous anatomical patterns always related to high energy trauma have been described.

We present a case of fracture of the body of the scapula that required surgical treatment due to intrathoracic displacement of a bone fragment related to a low energy trauma, representing an anatomical pattern not described in the literature previously.