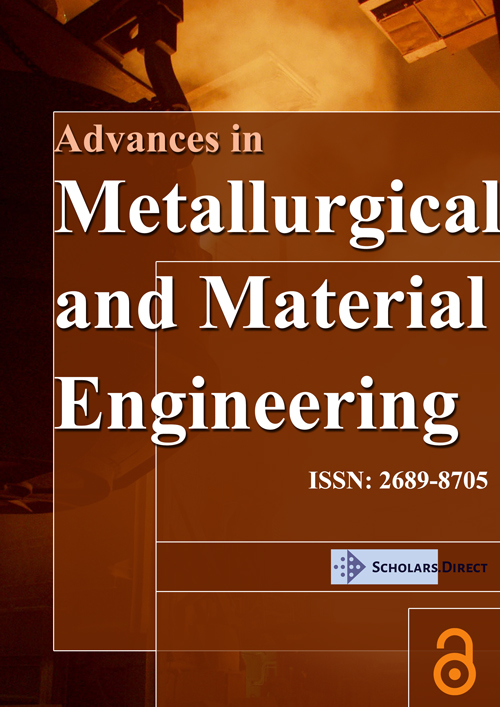 Advances in Metallurgical and Material Engineering

Slag vortexing, Reoxidation of the liquid steel from tundish open eye with high superheat casting are main causes behind many customer complains as well as high rejection of metal in integrated steel plants. In present investigation a novel stopper rod with refractory water cooled sub-chamber has been proposed. This is capable to reduce 60% skull generation and will help to reduce supeheat of liquid steel within the tundish nearly 50%. A Novel Filter Shroud concept has been developed which will capable to generate 'No Tundish Eye' formation. This will avoid re-oxidation of liquid steel during transfer of liquid steel from ladle to tundish. Finally a modified multi reactor with argon purging technology has been proposed as a future scope of study. All design concepts are studied computationally by ANSYS FLUENT Software. All proposed works are patentable.

Slag entrainment, yield improvement and re-oxidation of liquid steel have got tremendous importance in recent decade. Because due to slag entrainment and re-oxidation from tundish open eye, huge amount of metal or steel have to be rejected for generation of casting defects. Contamination occurs during non-steady state transformation of liquid steel from ladle as well as tundish during teeming period [1-4]. Slag vortexing is the main cause of contamination of liquid steel during ladle drainage or ladle change over period in tundish [1]. To minimize slag vortexing many efforts have been made by modifying tundish furniture's over many decades as explored literary in few journals [1,2].

Similarly "Tundish Open Eye" is the main key for generations of detrimental inclusions in many integrated and mini steel plants around the world. Approximately 40% re-oxidation of steel melt happen during transfer of the liquid steel from ladle to tundish in continuous casting caster due to formation of tundish open eye [5]. During this re-oxidation period 30-40 ppm oxygen absorption took place in liquid steel melt [6]. Argon injection at shroud inlet enhances the formation of large size tundish open eye [7]. To reduce this effect several flow control products or tundish furniture's has been developed over the decades [8-16]. Those advanced flow control products are quite capable to reduce formation of tundish open eye to some extent. But those advanced refractory molten flow devices have limitation to reduce generation of tundish open eye and re-oxidation. It is very difficult task for mini steel plant to produce quality steel in tundish. Because the tundish size is small and residence time for floatation of inclusions are less. For that reason the tundish sub-entry nozzles are choked frequently. This happens as re-oxidation products from slag eye are not able to float within the tundish and deposited at the inner wall of the tundish sub-entry nozzle.

Therefore optimization of tundish equipment is necessary to deliver high quality liquid steel in mold continuously. In the present work a modified stopper rod as well as tundish refractory water cooled sub-chamber has been used to improve the yield ad performance of tundish by suppressing vortex formation and controlled the superheat of liquid steel. Two novel shrouds also have been designed to suppress re-oxidation of liquid steel during its pouring to tundish from ladle, especially during ladle change over operation. During ladle change over period, some time is required to transfer the old ladle and open the next ladle from turret. During this period the metal level within the tundish goes down to maintain the casting operation continuously. When the next ladle steel pour on the tundish, vigorous turbulences are generated which cause opening of slag cover within the tundish. This contaminates the steel by forming macro inclusion by reaction of liquid steel in open air. The present novel shroud will suppress turbulence and will improve the liquid steel quality by suppressing the opening of slag eye. VOF (Volume of Fluid) simulation has been used as a tool to predict the current investigation computationally by using ANSYS FLUENT CFD software.

"Tundish" is an important buffer between ladle and mold. It is the heart of any integrated steel plant. The performance of the steel company is mainly dictated by the performance of Tundish. In the present work of several Novel tundish furniture's along with Multi Reactor Tundish with Argon Purging has been proposed which will act as a "Total Tundish Technology (T3)" towards production of Green and Clean Steel with Sustainability.

Figure 1a describes several aspects of the total tundish technology. Figure 1b is exhibiting the schematic with major dimensions of the "Total Technology Tundish". In present investigation little innovative tundish furniture have been developed which are capable to provide solution of the few aforementioned abnormalities schematically shown in Figure 1a. These abnormalities frequently happen within tundish slab caster and contaminate the liquid steel. These abnormalities decrease the yield and quality of slab or hot rolled coil production. It is anticipating that after incorporating those tundish furniture's along with MRT + AR purging tundish i.e. "Total technology tundish" will be developed which will solve all problems associated with Tundish.

To investigate the slag entrainment by vortexing phenomena a novel stopper rod as well as tundish bottom cylindrical with externally water cooled refractory sub-chamber has been designed as depicted in Figure 2a. The outlet was shallow type which was helping to drag maximum liquid metal before slag entrainment. In the present study a novel conceptual flow control refractory products called "Filter Shroud" has been proposed. The devices have shown schematically in the Figure 2b and Figure 2c. When the liquid steel will pass through the nozzle, the flow will be initially diverted by an intermediate baffle and then the flow will continue through a slight large diameter nozzle. Finally liquid steel will pass through 4 port hole and will fall on the inner wall of the outer cap type baffle. Argon and Flux can be injected to capture inclusions from the liquid steel melt. This will help to reduce re-oxidation and blow back effect by eliminating conventional shroud and turbo-stop system. This will also help to avoid contamination of liquid steel during non steady state transfer of liquid steel from ladle to tundish.

Computational 3D VOF (Volume of Fluid) simulation was performed by ANSYS FLUENT fluid dynamics software in the present numerical investigation. The details are explained in Table 1 [17-19].

Formation of slag vortexing and control of superheat