All Autoimmune Gastritis Are Not Created the Same

All Autoimmune Gastritis Are Not Created the Same

We read with great interest the outstanding scientific paper recently published in Gastroenterology Research by David Saulino and colleagues, entitled "Characterization of Chronic Gastritis in Lynch Syndrome Patients with Gastric Adenocarcinoma" [1]. By concluding that "... most gastric adenocarcinoma in Lynch Syndrome patients were located in the fundus and/or body ..., with a tumorigenesis of chronic gastritis (immune gastritis in most cases and H. pylori gastritis in the minority of cases)-associated intestinal metaplasia, dysplasia, and carcinoma", the Authors suggest gastric autoimmunity as electively involved in gastric oncogenesis.

Because of our long-standing interest in the still controversial assessment of gastric cancer risk associated with autoimmune gastritis, we would like to briefly comment on the results and the conclusions of the paper by Saulino, et al. [1-5].

The increased risk of gastric cancer (GC) in Lynch syndrome is well established. In their manuscript Saulino, et al. further support the hypothesis, previously put forward by Adar, et al. of a causative relationship between MSH2 mutation (as observed in mismatch repair-related Lynch syndrome) and autoimmune gastritis, and -as a consequence- between autoimmune gastritis and gastric adenocarcinoma [6-8].

In a retrospective series of 562 histologically consistent, serologically confirmed autoimmune gastritis, we detected neoplastic lesions (both non-invasive and invasive) in only 4 high-stage gastritis patients (Operative Link on Gastritis Assessment [OLGA] stages III and IV), 3 of whom with a history of H. pylori infection [2,7]. In a second long-term prospective follow-up study (data on file) of 258 patients with autoimmune gastritis who tested negative for H. pylori infection (H. pylori-serology and molecular testing on gastric biopsy tissue specimens) and assessed by paired endoscopy/histology, 2 cases of low-grade gastric dysplasia were histologically assessed, invasive gastric epithelial malignancies were never documented, and only 2 cancer cases (1 breast, and 1 lung) emerged during a mean follow-up time of 7 years (range: 2-17 years). Neither of these figures supports an increased risk of gastric cancer in patients with autoimmune gastritis, particularly when an etiological involvement of H. pylori is excluded.

In keeping with previous findings by Adar, et al. [6], the cohort of gastric cancer patients described by Saulino refers to a very peculiar biological-clinical setting, characterized by the combination of a cancer-promoting genetic profile (MSH2/MLH1 abnormality) with an autoimmune-based gastritis [1].

The loss of function/mutation of MSH2 (one of the most involved genetic defects resulting into Lynch's syndrome) has been consistently included among the features associated with increased tumor mutational burden (TMB), which is - in turn - involved in T-cell response against tumor cells [4,8-10]. Such a biological setting evokes the hypothesis of a common "syndromic" background (mismatch repair [MMR] genes deficiency) for both Lynch syndrome and autoimmune diseases [11,12]. Such an intriguing theory, however, cannot, per se, support linking the entire spectrum of autoimmune gastritis to MMR, ultimately associating (longstanding) gastric autoimmunity to a significantly increased risk of gastric cancer.

Among the 11 patients included in the Saulino's study (after excluding three cases with reactive gastropathy o normal antrum), five featured the inflammatory/atrophic involvement of the antral mucosa, and no information is provided on the antral mucosa of the three remaining patients [1]. While these features do not exclude a potential role for gastric autoimmunity in the onset of gastric cancer, they leave still open the question of the role of H. pylori infection (active, previous, or undetected) as co-responsible for the concretization field in which gastric cancer mostly develops.

In conclusion, the results obtained by Saulino, et al. stimulate interesting speculations on the biological relationships between Lynch syndrome, a subset of autoimmune gastritis, and non-gastric autoimmune diseases. These results, however, should be interpreted carefully before suggesting that non-Lynch-associated (i.e. "non-syndromic") autoimmune gastritis could be a significant determinant in increasing the risk for gastric cancer.

Authors have no financial disclosure to report.

The author declares that data supporting the findings of this study are available within the article.

• The authors declare that data supporting the findings of this study are available within the article.

• The data supporting the findings of this study are available from the corresponding author upon reasonable request.

• Any inquiries regarding supporting data availability of this study should be directed to the corresponding author.

© 2021 RUGGE M, et al. This is an open-access article distributed under the terms of the Creative Commons Attribution License, which permits unrestricted use, distribution, and reproduction in any medium, provided the original author and source are credited. 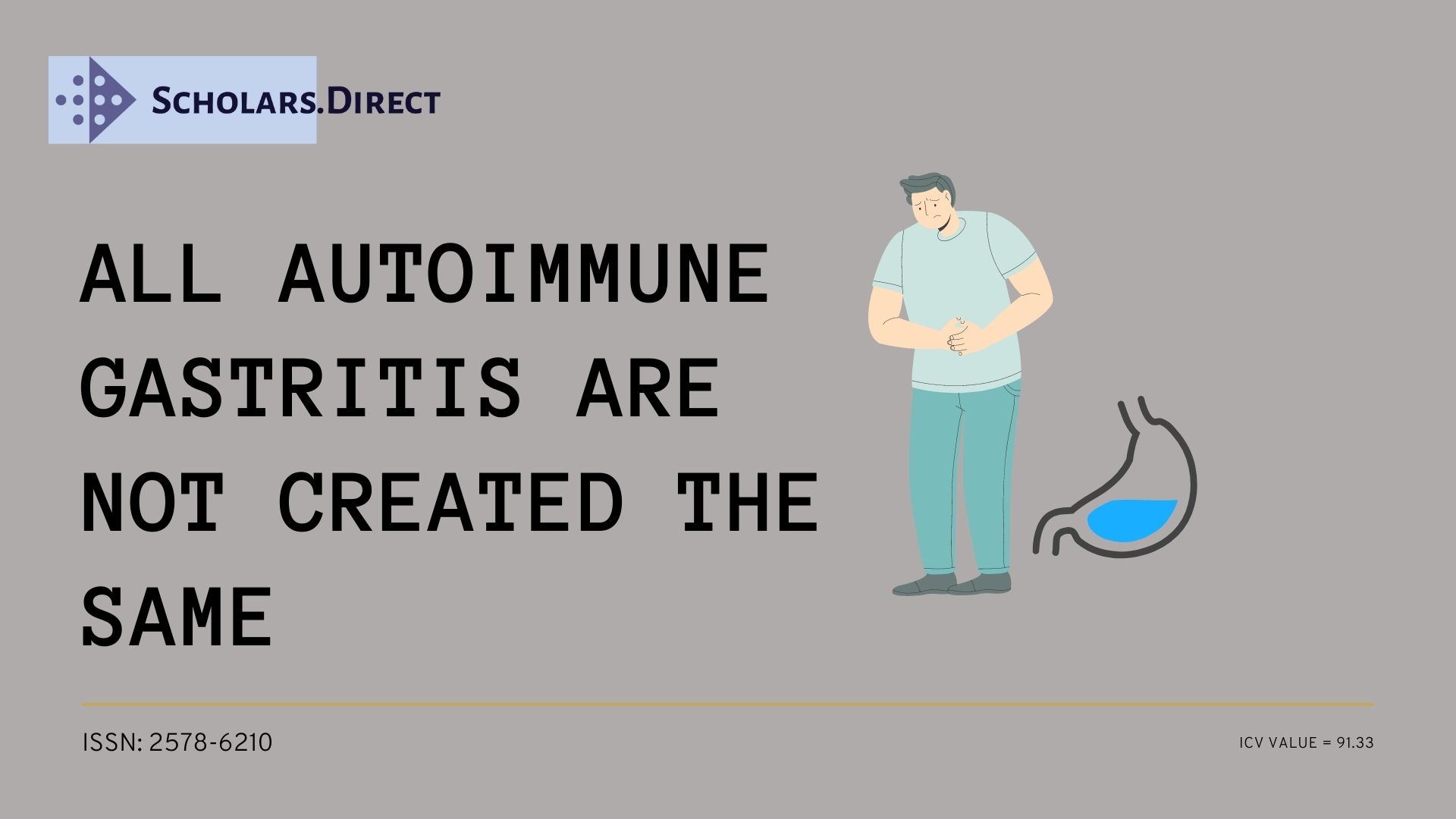