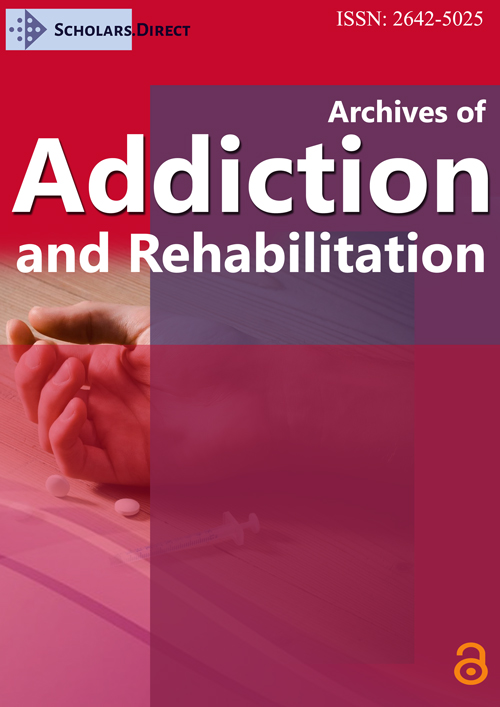 Archives of Addiction and Rehabilitation

Chronic Co-Use of Tobacco and Cannabis: A State of Knowledge

Chronic Co-Use of Tobacco and Cannabis: A State of Knowledge

The use of cannabis is very often associated with that of tobacco. The addictive power of cannabis is relatively low, that of tobacco is high. The regular co-use of tobacco and cannabis is at the origin of the reinforcement of the dependence on each substance and makes it often difficult to stop such consumption, at the same time as it favors the occurrence of somatic and psychological complications. Practitioners must identify this dual use, advice stopping; offer their help after taking stock of consumption and their bases. The care combines psychotherapeutic support and if no medication has proven efficacy to help stopping cannabis, nicotine replacement therapy makes possible to limit withdrawal syndrome, craving and increases patients' adherence to therapeutic monitoring. The mobilization of practitioners in the care of patients and researchers in the development of effective pharmacotherapies in stopping cannabis appears essential.

Cannabis is the most widely used illicit drug; 80% of regular cannabis users are tobacco smokers and often mix these two products before use. In the European Union the consumption of tobacco is decreasing, that of cannabis is more contrasted. The European Monitoring Center for Drugs and Drug Addiction (EMCDDA) in its 2019 report, noted prevalence rates during the year ranged between 3.5% (Hungary) and 21.8% (France); however, the stabilization of problematic cannabis uses has been observed [1]. In 2015, data from the National Survey on Drug Use and Health showed that 20% of young adults aged 18-25 and 7% of adults aged 26 and older had used cannabis at least once in the past 30 days [2]. In 2019, a study conducted in the State of Ontario (Canada) showed an increase in tobacco consumption (OR = 3.22 (95% IC: 1.89-5.49) among users of cannabis in the two years preceding the legalization of the product [3]. Beck, et al. [4] in the 2005 Health Barometer survey estimated that 5.3% of 20-24 year-old used tobacco and cannabis. The aim of this work is of synthesizing knowledge in the field of co-use of tobacco and cannabis and of the care of co-users.

Dependency and Neurobiological Interaction Between These Substances

Cannabis belongs to the cannabinaceae family; one variety, cannabis sativa indica ("Indian hemp") can be smoked as a weed cigarette or as a resin mixed with tobacco, in various ways. Delta-9-transtetrahydrocannabinol (∆ 9-THC), the main psychoactive product, is very lipophilic (plasma half-life: 25 to 35 hours), it binds to the body's fats, in particular the brain and can remain present several weeks in the event of chronic consumption thus attenuating the effects of the withdrawal syndrome [5]. The effects of cannabis in humans are linked to the activation of cannabinoid receptors CB1 (CB1-R) and CB2 (CB2-R). The receptors CB1 are mainly located in the central nervous system (hippocampus, cortex, substantia nigra, cerebellum) explaining its effects on memory, sensory perceptions and coordination [6]. Tobacco, belongs to the Solanaceae family; in the genus Nicotiana, Nicotiana tabacum is the most cultivated; among the various alkaloids contained by its leaf, nicotine is the main actor in tobacco dependence, its plasma elimination half-life of 2 hours; beta-carbolines, for their part, have an action of the MAOI type [5]. By binding to specific cholinergic receptors (R-AChN) located on dopaminergic, adrenergic and serotonergic neurons, nicotine ultimately activates the brain's hedonic system associated with dopamine release. The peripheral sensory effects of tobacco appear to be mediated by R-AChNs located on afferent trigeminal fibers [7]. Functional brain imaging studies have shown regional differences in dopaminergic secretion depending on craving for nicotine and other psychoactive substances [8].

Woddy, et al. [9] notes that tobacco is much more addictive than cannabis because 30% to 40% of consumers will become dependent on it, compared to 5% to 10% of cannabis users. The DSM5 defines substance use disorders and assesses their severity, as it describes a withdrawal syndrome for each substance [10]. Regardless of the combination of individual vulnerability factors and the frequency of daily consumption, the reciprocal reinforcement of dependence on each product leads to the observation of a smoking dependence assessed by the Fagerstrom test (FTND) [11] which is higher among users. cannabis and tobacco; The use of one cannabis gasket at least per week could multiply by 8 the risk of tobacco dependence, the latter could be used by some patients as a substitute for cannabis [8]. Tobacco has long been considered the gateway (gateway effect) to becoming a cannabis user; thus in a population of adolescents who smoke regularly, compared to non-smokers, the risk of becoming cannabis users is higher (OR = 4.9) [12]. On the other hand, for Okoli, et al. [13]. Marijuana users, compared to non-smokers, are 5.9 times more likely to become regular tobacco smokers with a strong perception of sensory dependence on tobacco (reverse gateway effect). Genome-wide association studies (GWAS) have shown that tobacco and cannabis use is in part attributable to variants (SNPs) located on genes encoding R-nACh subunits, in particular CHRNA3 [14]. A vulnerability could bring together all the mechanisms contributing to the emergence of addictions, including exposure to products and that early, regular use with high doses would facilitate [7].

The smokes produced by burning cannabis and tobacco are hotter and contain irritants and carcinogens, the presence of nicotine and cannabinoides are specific to each substance. The components resulting from the combustion of cannabis are more irritating than those of tobacco causing inflammation of the bronchial mucosa, altering the antifungal and bacterial defense capacities of the alveolar macrophage, this negative impact would be increased in people infected with HIV [15]; one gasket of tobacco and cannabis would be equivalent to 2.5 to 3 cigarettes of tobacco in terms of consequences on respiratory function [5]. The mode of inhalation of tobacco and cannabis smoke is often different from that of tobacco, characterized by a larger volume of puffs, a longer pulmonary retention and a cessation of breathing at the end of the exhalation sometimes accompanied by a Valsalva maneuver, the whole promoting the absorption of THC. The mode of inhalation adjusts to the way in which the cannabis smoke is inhaled with regular tobacco and cannabis use [5]. The concentration of THC has doubled (weed, resin) in the last ten years [1]; synthetic cannabinoids, having a strong affinity for CB receptors have appeared under various names; when dissolved, they can be mixed with tobacco or used in vaping [5].

A study by Meier, et al. [16] demonstrated, by measuring exposure biomarkers, that tobacco and cannabis users were exposed to higher levels of toxic chemicals (volatile organic compounds, polycyclic aromatic hydrocarbons) than cigarette smokers, for the same number of tobacco cigarettes smoked each day. These results should lead to additional studies to clarify the importance of the toxic risks of combined consumption of these addictive substances.

- Respiratory toxicity. The regular and prolonged co-use of tobacco and cannabis is both a cause of symptoms of chronic bronchial irritation and functional disorders of COPD (OR = 2.9; CI 95%: 1.53-5.51) more severe than the simple tobacco or cannabis use [17] and of increased risk of severe pulmonary infections [18], gaseous effusions from pleura and mediastinum and of bronchial cancer [19].

- Cardiovascular toxicity. This co-use is associated with an excess risk of myocardial infarction [5,7], particularly in young subjects without any other risk factor for cardiovascular disease, cerebrovascular accidents and of lower limbs arteritis.

- Diversified somatic toxicity [5,7]. Cannabis hyperemesis can occur in heavy users. Menstrual disturbances, infertility or early menopause are not uncommon and remind us that cannabis and tobacco are endocrine disruptors. Using tobacco and cannabis during pregnancy can cause a delay in school learning in the child after birth [5]. It is the cause of an increased risk of periodontal disease and cancer of the head and neck with elevated oncoprotein levels (EGFR) [20].

The chronic use of tobacco and cannabis increases the risk of worsening anxiety and depressive disorders as well as of suicidal risk; it could participate in more frequent cognitive disorders in the long term (memory disorders, increased impulsivity, deficit in response inhibition) [8,21]. The risk of psychotic thought disorganization syndrome induced by the combination of tobacco and cannabis is not clearly known [22]. Co-users of tobacco and marijuana compared to marijuana users more often present psychological, social and legal problems; they are subject to a higher risk in driving vehicles and using machines [4].

A systematic review found that cannabis and tobacco users had greater difficulty to quit than users cannabis or tobacco and more frequently presented psychosocial and anxiety-depressive disorders [22]. This difficulty is also linked to the fact that these patients often want to stop the consumption of one substance and reduce the use of the other (to stop smoking while decreasing use of cannabis), often they underestimate the force of their addiction, finally there is no specific drug for cannabis withdrawal. Des management principles can be defined.

The damage due to consumption can occur before the subject becomes aware of his addiction; therefore, it is necessary to inform him about the risks involved, the benefits to quit and offering to help him stopping or reducing consumption before quitting. Tools can help to assess the levels of dependence: (CAST questionnaire "Cannabis Abuse Screening Test" [23,24] for cannabis, FTND "Fagerström Test for Nicotine Dependence" [11] for tobacco. The severity of the dependence can be appreciate according to the items of the DSM5-SUD). The psychopathological basement of the use, the existence of anxiety-depressive disorders will be identified (clinical, HAD test "Hospital Anxiety Depression scale") [25] as well as social insecurity situations, misuse of other psychoactive substances, legal difficulties. Smokers cumulating the difficulties arising from addictology clinics.

The issue of simultaneous or successive stopping has not been settled, this justifies taking into account the patient's preferences. However, the simultaneous stopping of two substances sharing the same way of administration, neurobiological interactivities, neighboring rituals, craving as relapse factor, is a coherent solution.

- Psychotherapeutic aspect: This management under various aspects (cognitive-behavioral, psychodynamic and family therapies) makes it possible to create the therapeutic alliance, the motivation to quit and to strengthen the therapeutic follow-up such as the management of craving and the prevention of relapse [21,26]; remote support means (internet, support phone lines) to provide additional help.

- Pharmacological aspect: L'aide à l'arrêt involves, in the first instance, nicotine replacement therapy (TNS) at best by a combination of transdermal and oral forms, which helps to limit the withdrawal syndrome and craving when quitting; a study [27] on 148 patients co-users of tobacco and cannabis aged 17 to 40 years showed that the use of TNS reinforced adherence to therapeutic monitoring (p < 0.04). Bupropion is rather not recommended because of the sleep disturbances it can cause [7], varenicline is at the experimental stage in this indication [28]. A recent Cochrane review of 21 studies [29] assessed the benefit of all drug-smoking cessation strategies and concluded that no recommendations could currently be deduced. However, molecules (serotonin reuptake inhibitors, buspirone, atomoxetine, antiepileptics) could have a utility; the cannabinoid agonists, however promising, are still subject to experimentation in the same way as gabapentin and N-acethylcysteine. The place of the electronic cigarette in the aid to quit is uncertain if the pulmonary toxicity of synthetic cannabinoids mixed with liquid containing nicotine has been shown to be capable of causing severe, sometimes fatal, pneumonitis [30].

The co-use of tobacco and cannabis est responsible for a significant addiction as well as toxic effects. Management stopping co-use of tobacco and cannabis needs to be optimized because stopping this double consumption is often difficult. For ten years the content of active principle in cannabis has increased significantly, the market for recreational cannabis has developed in countries where its use has been legalized, synthetic cannabinoids with a high affinity for CB-R are offered on sale. These facts seem to underline the importance of the involvement of health professionals in the care of tobacco and cannabis users, and the urgency of developing effective treatments for stopping cannabis to complement the measures. prevention programs intended to limit the use of these substances.

The authors declare that they have no conflict of interest in connection with the writing of this article.

© 2021 Perriot J, et al. This is an open-access article distributed under the terms of the Creative Commons Attribution License, which permits unrestricted use, distribution, and reproduction in any medium, provided the original author and source are credited.