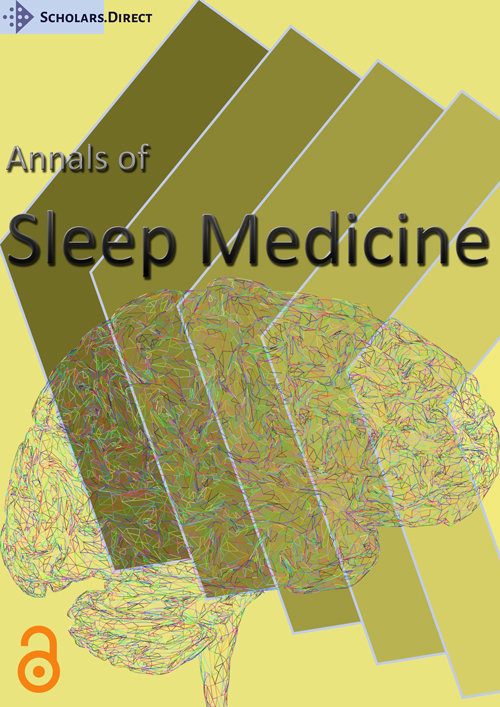 Eructation can be commonly seen in patients with Gastroesophageal Reflux Disease (GERD). It is also seen in functional behavioral disorder which is commonly treated with behavioral and speech therapy. In the setting of Obstructive Sleep Apnea (OSA); Aerophagia (swallowing air) can be encountered after initiation of Continuous Positive Airway Pressure (CPAP) therapy and can cause eructation, increased bloating and flatus. We present a rare case of persistent nocturnal eructation which resolved after the diagnosis and treatment of OSA with CPAP therapy.

Aerophagia, the swallowing of air, is a functional gastrointestinal disorder that results in abdominal distension, belching, and flatulence [1]. When occurring in the absence of other disorders, it is seen as a behavioral disorder and commonly treated with behavioral therapy and/or speech therapy [2]. Aerophagia is one of the main sources of stomach gas and is commonly believed to be a putative cause of eructation and other gas-related abdominal symptoms. Eructation may be classified into one of two types, supragastric or gastric. In supragastric eructation, air is stored and released in and from the esophagus and is typically voluntary. This is sometimes done with inspiration against a closed glottis while the upper esophageal sphincter is relaxed, creating a negative intrathoracic pressure that suctions air through the upper esophageal sphincter (UES) [3]. In gastric belching, air enters the stomach during a transient lower-esophageal sphincter relaxation, and is usually involuntary [4]. In the context of OSA treatment with PAP therapy, aerophagia is typically considered to be a sequelae, particularly associated with pre-existing gastric reflux disorder and is rarely seen prior to therapy [5]. Positive airway pressure (PAP) can force air through a dysfunctional upper esophageal sphincter secondary to GERD. A case where eructation resolves with PAP therapy has not been previously reported in the literature.

A 66-year-old gentleman presented to our sleep clinic for nocturnal eructation for two years. Patient and wife described a very loud, distinct belching that only occurs throughout the night, as though the patient was gulping air, and was extremely disruptive to both of their sleep. The wife noted that the patient was snoring and would occasionally be gasping for breath prior to these episodes. The patient reported mild daytime sleepiness. (Epworth Sleepiness Score 10) His symptoms did not improve with sleeping with his head elevated or sleeping sitting up.

General Surgery evaluated the patient and treated him empirically with Neomycin and Flagyl for one week with no relief. Initiation of Metoclopramide improved but did not resolve his symptoms. Right upper quadrant ultrasound showed normal hepatobiliary and gallbladder anatomy. Etiologies of bacterial overgrowth and gallbladder dysfunction were thus ruled out. He was seen by ENT who felt his symptoms were the result of Esophageal dysfunction and referred to Gastroenterology, where an endoscopy revealed no abnormalities of the esophageal lumen. Barium esophagogram revealed esophageal dysmotility with tertiary contractions.

A course of Proton Pump Inhibitor was also completed with minimal change in the Eructation symptoms although the dysphagia had resolved by the time of his presentation to the clinic.His medical history also included a history of dysphagia and GERD. 3 years prior to his presentation to the sleep clinic, he reported intermittent dysphagia with both food and liquids occasionally becoming lodged in his throat area. Because the patient also reported snoring, witnessed apneas, and daytime sleepiness, STOP-BANG Score of 7/8 with an Epworth Sleepiness Score of 12/24, he was judged to have a increased risk of sleep apnea. Physical examination was unremarkable except for BMI 32, Neck circumference 17¾ Inches. Crowded oropharynx, Mallampati IV. An in-lab polysomnography was conducted that showed moderate obstructive sleep apnea with an AHI (Apnea Hypopnea Index) of 17.9/hr and the patient was split to CPAP therapy the same night. CPAP of 8 cm of H2O was found to be effective (Figure 1).

When seen on follow-up after CPAP therapy had been started for 4 weeks, the patient reported complete resolution of his nighttime eructation. His residual AHI was 2.3/hr. His symptoms remain resolved and have not returned in long-term follow-up up to two years after initiation of therapy.

Persistent eructation is typically seen as a sequela of behavioral aerophagia or gastrointestinal dyspepsia. Involuntary nocturnal persistent eructation is rare and has not previously been reported in the medical literature. We suggest that inspirations against an upper airway obstruction as in obstructive sleep apnea events can create an increased negative intrathoracic pressure that can force air up through open or incompetent lower & upper esophageal sphincters. The escape of this trapped air (with each apnea recovery) can lead to repeated disruptive belching events. Mechanism of events the patient's prior history of dysphagia, although resolved at the time of his presentation to the clinic, may indicate a disorder of the esophageal sphincters, possibly secondary to GERD or dysmotility seen during esophagogram. Increasing negative intrathoracic pressure during inspiratory effort on a closed airway transmitted to the esophagus likely causes upward suction of air into the esophagus. During recovery gasps after from apneic events this air likely escapes and best explains the recurrent nocturnal eructation.Other causes of nocturnal eructation such as dyspepsia are unlikely in this patient due to complete resolution with treatment of his obstructive sleep apnea with PAP (Figure 2 and Figure 3).

Snoring/sleep apnea is not generally considered as a common cause of eructation and an association has not been previously reported in the literature. We suggest that persistent nocturnal eructation can be a diagnostic clue towards OSA and screening for the same may help avoid unnecessary diagnostic testing. Nocturnal eructation in a patient with OSA and without other disorders of the gastrointestinal tract may be treated with PAP therapy before more procedures (Endoscopies/Imaging) or medication trials are considered.

All authors have seen and approved the manuscript.

The author(s) received no financial support for the research, authorship, and/or publication of this article.

The author(s) declared no potential conflicts of interest with respect to the research, authorship, and/or publication of this article.

© 2021 Singh A, et al. This is an open-access article distributed under the terms of the Creative Commons Attribution License, which permits unrestricted use, distribution, and reproduction in any medium, provided the original author and source are credited.

Eructation can be commonly seen in patients with Gastroesophageal Reflux Disease (GERD). It is also seen in functional behavioral disorder which is commonly treated with behavioral and speech therapy. In the setting of Obstructive Sleep Apnea (OSA); Aerophagia (swallowing air) can be encountered after initiation of Continuous Positive Airway Pressure (CPAP) therapy and can cause eructation, increased bloating and flatus. We present a rare case of persistent nocturnal eructation which resolved after the diagnosis and treatment of OSA with CPAP therapy.