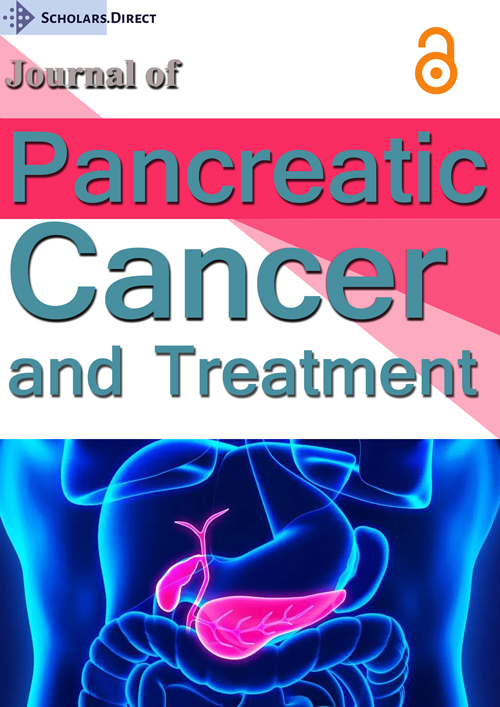 Hepatoid Carcinoma of the Pancreas: A Case Report

Hepatoid Carcinoma of the Pancreas: A Case Report

Pancreatic hepatoid carcinoma is a pancreatic rare malignant epithelial neoplasia that is difficult to diagnose. We report the case of a 59-year-old woman consulting for an epigastric discomfort. Radiological investigations showed a tissular mass syndrome of the pancreatic head. A cephalic pancreaticoduodenectomy was performed. Anatomopathology examination led to the diagnosis of hepatoid carcinoma of the pancreas. From this observation, the authors recall the difficulties of the diagnosis of this exceptional tumor.

Hepatoid carcinoma is a rare, extra-hepatic primary neoplasia, its morphological characteristics are similar to those of hepatocellular carcinoma [1]. It can be localized in several organs that derive from the anterior foregut endoderm, including the esophagus, stomach, gallbladder, duodenum, and pancreas [2]. Hruban, et al. reported the first case of pancreatic hepatoid in 1987 [3]. To date, 34 cases have been reported in the medical literature [4]. We report and discuss a pancreatic hepatoid carcinoma, diagnosed in a 59-year-old woman, discovered during the exploration of an epigastric discomfort.

A 59-year-old woman consulted for an epigastric discomfort. Her antecedent was an infiltrative ductal adenocarcinoma of the right breast in 2010, treated by a tumorectomy and associated with postoperative radiotherapy and hormonal therapy. There was no relevant history of alcohol or tobacco consumption or familial history. The clinical assessment was no particularity. Cardiac and pulmonary investigations were negative. Liver function tests showed anicteric cholestasis and cytolysis. Serum markers for hepatitis B and C were negative. Serum carcinoembryonic antigen (CEA) and CA 19-9 levels were not elevated. The abdominal ultrasound revealed a 3 cm large, hypoechoic solid mass syndrome on the pancreatic head (Figure 1).

Thoracic-abdominal-pelvic computed tomography (CT) showed a 40 × 35 mm large multilobed mass, in pancreatic head, spontaneously isodense, without any internal calcification, moderately enhanced and heterogeneous at arterial phase, which became isodense at portal phase. The superior mesenteric vein was displaced, and appeared laminated but remained permeable. The intrahepatic and extrahepatic bile ducts were not dilated, as was the Wirsung's duct. No liver, splenic or renal abnormality was found (Figure 2a, Figure 2b and Figure 2c). The patient was claustrophobic, so magnetic resonance imaging (MRI) was not performed.

Complementary endoscopic ultrasound has found in addition of the pancreatic head mass a 24 mm precaval satellite lymph node, adherent to the lesion. The pancreatic mass was classified usT3N1. Both lymphadenopathy and pancreatic mass were biopsied and initially diagnosed as acinar cell adenocarcinoma. Neoadjuvant chemotherapy was prescribed and allowed a reduction in tumor size, followed by surgery, laparotomy, cephalic pancreaticoduodenectomy and lymph node dissection with pyloric preservation.

Histological examination of resected specimens showed that tumor's proliferation adopted a hepatoid architecture, organized in large trabecular pattern, and composed of large polygonal cells with abundant eosinophilic cytoplasm, centrally located nuclei, nucleoli (Figure 3a). Immunohistochemical staining of tumor cells showed a focal positivity for CK19 and heterogeneous expression for HepPar1 (Figure 3b). Whereas, the tumor cells were negative for Bcl10. The hepatocytic aspect of this proliferation and its negativity for Bcl10 exclude acinar cell carcinoma hypothesis. Thus, the final diagnosis of hepatoid carcinoma of the pancreas was retained.

Serum AFP level was normal. The postoperative course was uneventful and the patient was discharged from hospital after 17 days of hospitalization.

Adjuvant chemotherapy was done but had to be stopped because of poor tolerance with appearance of anemia at 10 g/dl and neutropenia at 990/µl.

Follow-up with CT had been performed every 3-months for 24-months without any signs of recurrence up until now.

The exact pathogenesis of the development of pancreatic hepatoid carcinoma is still unknown, but two theories have been proposed to explain its histopathological features.

Some searchers favor the embryological theory of "liverectopia": Since the pancreas and liver cells both derived from the endodermal cells of the digestive tract, the ectopic liver tissue probably exists in the pancreas. An activation of the liver specific carcinogenesis process may also occur in the ectopic liver tissue located in the pancreas [4,5]. This theory seems to be the most widely accepted pathogenic mechanism in extrahepatic hepatoid carcinoma.

While other searchers favor the histogenetic mechanism: "A type of transdifferentiation of pancreatic cells into hepatocytes". It is claimed that the multipotent cells or pancreatic stem cells normally suppress differentiation hepatocytic gene, which could be activated during carcinogenesis [4]. The hepatocytes function after transdifferentiation has been demonstrated in animal studies such as the pancreas of adult mice containing hepatocyte stem cells able of significant development [9]. This could explain the presence of mixed hepatoid carcinoma in the pancreas.

Of the 34 reported cases, 4 histological subtypes of pancreatic hepatoid carcinoma could be classified [4,5]:

• Pure hepatoid carcinoma is the most common histological type and accounts for 65% (22 of 34) of the reported cases. This subtype shows morphological characteristics similar to that of hepatocellular carcinoma.

• Hepatoid carcinoma associated with acinar cell carcinoma which accounts for 2% (1 of 34) of the reported cases.

• Hepatoid carcinoma associated with glandular adenocarcinoma which accounts for 9% (3 of 34) of the reported cases.

A high level of AFP is often present while diagnosing a pancreatic hepatoid carcinoma but it is not specific [5]. AFP can be used post-operatively for evaluating the response to chemotherapy and for detecting possible tumor recurrence in the follow-up.

Pancreatic hepatoid carcinoma has no particular radiological sign. Ultrasound can be manifest direct signs such as the visualization of a hypoechoic lesion, deforming or not the contours of the gland or indirect signs such as a Wirsung duct dilation, dilatation of the common bile duct and intrahepatic bile ducts when the lesion is located in the pancreatic head [8]. The CT often presents hepatoid carcinoma as an isodense or hypodense mass that is heterogeneous at the arterial phase and isodense or weakly elevated at the portal phase. CT also allows to establish a resectability balance [8].The MRI of pancreatic hepatoid carcinoma may occur as a lesion with high signal on T2 with restricted diffusion and enhancement after injection of contrast agent. A liver MRI is recommended at the diagnosis of any localized pancreatic neoplasia before surgery to ensure the lack of subcentimetric liver metastases [10]. If the main purpose of upper gastrointestinal endoscopic ultrasound is to allow biopsy for cytology or histology, it can also provide additional information about locoregional extension [11].

Histologically, hepatoid carcinoma occurs as a large tumor cells proliferating; there is large polygonal cells in a trabecular pattern with abundant eosinophilic cytoplasm, central nuclei, nucleoli. Immunohistochemically, hepatoid carcinomas are most often positive for the pancytokeratin marker AE1/AE3, CK 19 and CK18 and negative for CK7 [4]. CK20 positivity is seen in approximately 25-47% of hepatoid neoplasm [5] and it stains for HepPar1 [4].

The differential diagnosis of hepatoid carcinoma of the pancreas includes metastatic hepatocellular carcinoma, secondary hepatoid carcinoma from an other organ particularly the stomach, and primary pancreatic tumors with eosinophilic cytoplasm. To exclude metastatic hepatocellular carcinoma, some authors suggest the use of the immunohistochemical staining for 2 hepatocyte specific transporters (bile salt export pump [BSEP] and multidrug-resistance protein 3 [MDR3]) that is not usually expressed by hepatoid carcinoma cells [12]. These markers has not been done because not possible in our center.

Immunohistochemistry has also a key role to discriminate metastatic breast cancer from primary pancreatic carcinoma. Mammaglobin is a recently described marker of breast differentiation: Its expression has been reported in 70% to 80% of primary and metastatic breast tumors [14].

Due to the rarity of hepatoid carcinoma, there is no consensus on its treatment. Decisions must be taken according to circumstances, in multidisciplinary consultation. In general, surgical complete tumor resection is the preferred option. This can be followed by radiatiotherapy and/or chemotherapy.

After curative surgical resection, clinical and paraclinical monitoring could be useful to diagnose precociously recurrences. It is based on: A clinical examination, a serum CA19-9 and AFP level if it was high at diagnosis time, and a thoracic-abdominal-pelvic CT every 3-months during the period of high risk of recurrence (2-3 years) then at a more spaced pace every 6-12-months up to 5-years [5].

Presently, there is no specific method or guideline to prevent pancreatic hepatoid carcinoma.

Pancreatic hepatoid carcinoma is a rare pancreatic malignant epithelial neoplasia. It shows the morphological and immunohistological characteristics of hepatocellular carcinoma. Hepatoid carcinoma of the pancreas may be pure or be associated with another tumor. The diagnosis is based on radiological, histological and immunohistochemical arguments. Radiological examinations are very important for the diagnosis and the follow-up of this pathology. Pancreatic hepatoid carcinoma is typically an aggressive tumor, difficult to diagnose and to treat. The prognosis is usually poor. No consensus have been established for the treatment, decisions must be taken on multidisciplinary consultation according to the case.

© 2019 Tomboravo C, et al. This is an open-access article distributed under the terms of the Creative Commons Attribution License, which permits unrestricted use, distribution, and reproduction in any medium, provided the original author and source are credited.

Pancreatic hepatoid carcinoma is a pancreatic rare malignant epithelial neoplasia that is difficult to diagnose. We report the case of a 59-year-old woman consulting for an epigastric discomfort. Radiological investigations showed a tissular mass syndrome of the pancreatic head. A cephalic pancreaticoduodenectomy was performed. Anatomopathology examination led to the diagnosis of hepatoid carcinoma of the pancreas. From this observation, the authors recall the difficulties of the diagnosis of this exceptional tumor.