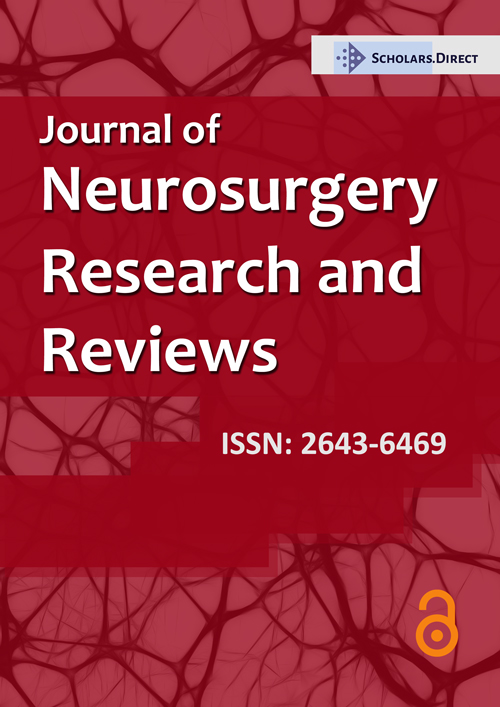 Journal of Neurosurgery Research and Reviews

Cognitive Age and Usability of Health Website among Older Adults

Cognitive Age and Usability of Health Website among Older Adults

Tuberculoma of the brain is a hazardous disease, whose incidence in developed countries is increasing in parallel with the growing spread of tuberculosis. Brain tuberculoma are initially managed with antimycobacterial drugs. However, the mainstay of therapy is neurosurgery. Surgery is warranted if tuberculoma is refractory to medical therapy, if it carries a symptomatic mass effect, or if there is no other way to establish a diagnosis. In this paper we present two cases of posterior fossa tuberculoma in patients without a previous history of tuberculosis or immunodeficit. Both cases required neurosurgery for successful and safe resolution of brain tuberculosis.

Tuberculosis (TB) is experiencing resurgence in Western countries, due to immigration from endemic areas [1]. Central Nervous System (CNS) involvement of TB is caused by hematogenous spread and is reported in approximately 10% of cases [2] as meningitis or a tuberculoma. CNS tuberculomas can be located both supra- and infratentorially, (though posterior fossa location is rare) and can present as single or multiple lesions [3]. Major histopathologic features of tuberculomas include a central necrotic area surrounded by an edematous brain tissue with reactive gliosis [4]. Several studies have stated that even patients who are treated adequately have a severe prognosis, with a mortality rate ranging from 6 to 65% [5].

In the present paper we describe two cases of cerebellar tuberculomas occurring in patients without a previous story of TB, who were surgically treated at our Institution in the last 4 years. We discuss the difficulties in obtaining a preoperative diagnosis and underline the role of surgery in the management of such challenging cases.

A 35-year-old female presented to our outpatient clinic with a four-month history of pulsatile headache involving left side, with transient left eye ptosis and low-grade fever. Previous medical history was unremarkable; no immunodeficit was present; she had worked for a short period in a reception center for immigrants. A Magnetic Resonance (MR) scan of the brain showed a nodular lesion in the left superior cerebellar hemisphere (23 mm) and a second smaller lesion (8 mm) in the right inferior cerebellar hemisphere, both with central necrosis and ring enhancement, surrounded by perilesional edema; diffusion was markedly restricted in the central core of the larger mass. A whole-body CT scan was performed, which showed nodular areas with irregular margins and central necrosis in both lungs. On admission the patient appeared in good general clinical conditions and the neurological examination was unremarkable. Biopsy of the pulmonary lesion was performed: The histological examination demonstrated "multifocal giant cell granulomatous inflammation with central necrosis", suggestive for TB granuloma. Bronchial alveolar lavage was positive for Mycobacterium tuberculosis. Therefore, 4-drug antitubercular therapy (isoniazid 300 mg/day orally, subsequently replaced with levofloxacin 750 mg/day orally; rifampicin 600 mg/day orally; ethambutol 800 mg/day orally; and pyrazinamide 1500 mg/day orally) was started; moreover, for the onset of hydrocephalus, the patient underwent third ventriculostomy. The patient was then discharged and continued antimycobacterial drugs as outpatient. One month later the patient was readmitted because of worsening headache with neck stiffness. A repeated brain MR scan (Figure 1a, Figure 1b, Figure 1c and Figure 1d) showed that the left lesion, though volumetrically stable, had "generated" three satellite cystic lesions, determining an increased mass effect; contrarily, the smaller right lesion was stable. Medical therapy with steroid and mannitol was ineffective. Therefore, the patient underwent a left paramedian suboccipital craniotomy and complete excision of the left cerebellar lesion. Histopathologically, a chronic inflammatory tissue in a necrotic background was evident, without the classic caseous necrosis and Langhans giant cells. This picture suggested an evolution of the tuberculoma into an abscess. Microbiologic and genomic assay of the tissue was positive for Mycobacterium Tuberculosis. Post-operative course was uneventful and was characterized by a marked improvement of intracranial hypertension symptoms. Post-operative brain MRI scan (Figure 1e) confirmed the gross total removal of the left lesion and the reduction in volume (7 × 6 mm) of the smallest one in the right cerebellar hemisphere. The patient then completed her course of antimycobacterial therapy (15 months overall). At 3-year follow-up, she is in good clinical conditions and the brain MR scan is unremarkable.

A 34-year-old nun from Congo presented to the Emergency Department for a one-week history of worsening headache and neck pain associated with vomiting. No fever or previous story of TB or immunodeficit was reported. An urgent brain CT scan (Figure 1f) showed a round-shaped lesion in the right cerebellar hemisphere, 16 mm of diameter, characterized by a central necrotic core, ring enhancement and perilesional edema, with mass effect and supratentorial hydrocephalus. Due to the rapid worsening of neurological conditions, with the onset of drowsiness, the patient underwent emergent neurosurgery for gross total removal of the cerebellar lesion by a suboccipital craniotomy and right ventriculostomy. Histopathological examination showed an inflammatory necrotic lesion with multinuclear giant cell. Moreover, microbiologic and genomic assay of the tissue was positive for Mycobacterium Tuberculosis, thus establishing a diagnosis of tuberculoma. The post-operative course was uneventful, with resolution of preoperative complaints. Monitoring of intracranial pressure carried normal values, therefore ventriculostomy could be removed. Based on pathological and microbiological evidences, the patient started antimycobacterial therapy (isoniazid 300 mg/day orally, rifampicin 600 mg/day orally, ethambutol 800 mg/day orally and pyrazinamide 1500 mg/day orally) which is currently ongoing. Follow-up brain CT and MR scans showed the removal of the tumor and the resolution of hydrocephalus. It is noticeable that there was no evidence of pulmonary TB; in fact, chest X-ray was unremarkable and microbiologic and genomic assays of the various body fluids were negative for mycobacterium tuberculosis.

TB is a major health problem in developing countries. However, due to immigration and to the increased number of immunocompromised patients, TB has re-emerged as an important health issue also in developed countries. Tuberculomas occurs when small tuberculous foci ("Rich foci") enlarge but do not rupture into subarachnoid space; therefore, they may exist in the absence of typical tuberculous meningitis [6]. Histopathologically, an intracranial tuberculoma is a lesion consisting of epithelioid cells, giant cells, and lymphocytes surrounding a caseating necrotizing center. It is usually solitary and more commonly located in frontal and parietal lobes; however, multiple lesions and lesions involving posterior fossa have also been documented [7]. Medical therapy is appropriate in the majority of cases of CNS TB. This is not always true for tuberculomas, which generally respond poorly to antimycobacterial therapy [8]. Moreover, surgery for tuberculoma can be justified by the need to perform tissue diagnosis for early institution of appropriate therapy and in case of important mass effect requiring surgical decompression. From a literature review (Table 1), we found 8 case reports of posterior fossa tuberculomas and, indeed, neurosurgery was performed in almost all cases. Moreover, in 6 out of 8 cases, the surgical operation had a decompressive purpose, whereas in a single case a biopsy with a diagnostic purpose only was performed [9-16].

In our cases, surgery was needed because of the life-threatening masses in posterior fossa not responding to medical therapy (Case 1, Figure 1a, Figure1b, Figure 1c and Figure 1d) or needing emergent decompression (Case 2, Figure 1f). Moreover, in both cases the cerebellar tuberculoma was the presenting symptoms of a TB, and in Case 2 surgery was necessary to make diagnosis of TB. In our knowledge, our Case 1 is the first case reported in literature in which one cerebellar tuberculoma responded to therapy, while the other not.

In conclusion, brain tuberculomas are not uncommon and must always be considered in the differential diagnosis of intracranial brain lesions. Neuroimaging might be helpful in the diagnosis, as TB generally appear markedly restricted at the diffusion-weighted images [17]. Though an attempt at performing medical therapy is mandatory, surgery is the mainstay of the treatment of tuberculomas, especially when the mass effect is a serious concern.

© 2017 Pignotti F, et al. This is an open-access article distributed under the terms of the Creative Commons Attribution License, which permits unrestricted use, distribution, and reproduction in any medium, provided the original author and source are credited.

Tuberculoma of the brain is a hazardous disease, whose incidence in developed countries is increasing in parallel with the growing spread of tuberculosis. Brain tuberculoma are initially managed with antimycobacterial drugs. However, the mainstay of therapy is neurosurgery. Surgery is warranted if tuberculoma is refractory to medical therapy, if it carries a symptomatic mass effect, or if there is no other way to establish a diagnosis. In this paper we present two cases of posterior fossa tuberculoma in patients without a previous history of tuberculosis or immunodeficit. Both cases required neurosurgery for successful and safe resolution of brain tuberculosis.

(a-d) Case 1 pre-operative axial MR scan, showing a left cerebellar cystic lesion with mass effect. The lesion has a ring enhancement and a hypointense core in post-contrast T1-weighted images (a) While the T2-weighted; (b) FLAIR; (c) Sequences show a well-defined lesion with perifocal edema and mass effect; (d) The diffusion-weighted images show a marked restriction of diffusion in the necrotic central core of the larger mass; (e) The post-operative post-contrast T1-weighted axial MR scan shows the gross total removal of the lesion; (f) Pre-operative post-contrast axial CT scan of Case 2 demonstrating a round-shaped lesion in the right cerebellar hemisphere characterized by a central necrotic core, a ring enhancement and perilesional edema, determining mass effect on the fourth ventricle.