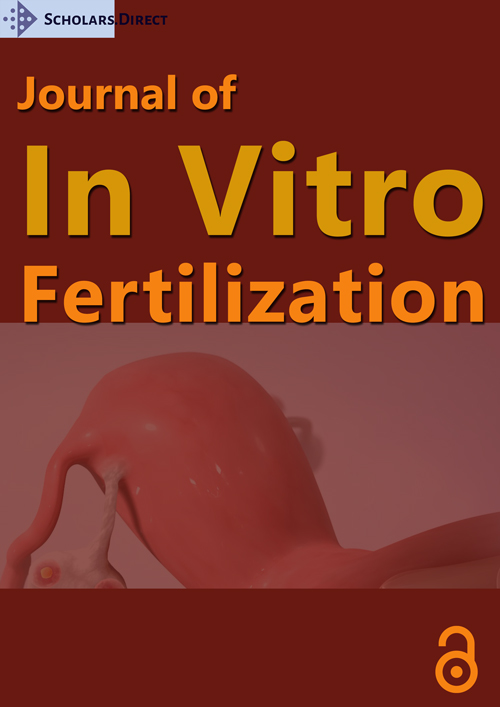 Journal of In Vitro Fertilization

The Efficacy of Letrozole with or without Gonadotropins on Pregnancy Rates after Intrauterine Insemination in Women with Polycystic Ovarian Syndrome: A Randomized Clinical Trial

Ali HAA, Sheir RE, Sadek AM (2022) The Efficacy of Letrozole with or without Gonadotropins on Pregnancy Rates after Intrauterine Insemination in Women with Polycystic Ovarian Syndrome: A Randomized Clinical Trial. J In Vitro Fertilization 4(1):17-22.

The Efficacy of Letrozole with or without Gonadotropins on Pregnancy Rates after Intrauterine Insemination in Women with Polycystic Ovarian Syndrome: A Randomized Clinical Trial

Background: In this study, we aim to assess the efficacy of letrozole with and without gonadotropins on pregnancy outcomes especially the pregnancy rate, ovulation induction, and endometrial thickness in women suffering from polycystic ovarian syndrome (PCOS).

Methods: We have developed a randomized clinical trial where we included 90 infertile women due to PCOS that met our criteria. Data collection took place at three in vitro fertilization (IVF) centers in Egypt since May 2019 until we reached the target population number.

Conclusion: Administration of letrozole alone or in combination with gonadotropins enhances the rates of pregnancy in PCOS patients together with the minimal adverse events regarding endometrial thickening and frequency of ovulation.

Although polycystic ovary syndrome (PCOS) poses a high prevalence rate among pregnant women [1], the etiology is still unclear, and many factors have been involved. Patients with PCOS are at risk of developing many complications. These include all members of metabolic syndrome especially type 2 diabetes mellitus (DM), dyslipidemia, and hypertension [2-5]. Moreover, previous research demonstrated that PCOS can complicate pregnancy with an increased incidence of preterm labor, preeclampsia, and gestational diabetes [6-9]. Moreover, around 75% of PCOS patients develop metabolic abnormalities and ovulation disturbances leading to infertility or sub fertility [10-12]. Therefore, proper diagnosis and treatment are essential in reducing the prevalence rate and adverse events which can be achieved by understanding the pathophysiology of the disease. Hyperinsulinemia and hyperandrogenism (HR) have been found to take part in the development of the syndrome, the mechanism of which, however, is still unknown [13].

Many approaches have been presented for the management of PCOS. These include lifestyle modifications as weight reduction and dietary interventions. Intrauterine insemination (IUI) has been performed to induce pregnancy in many infertility events including ovulatory disorders, unexplained infertility and male-related infertility [14]. However, many pharmacological regimens have been introduced for further ovarian stimulation and pregnancy induction. Various treatment regimens have been reported as clomiphene citrate (CC), letrozole, and gonadotrophins. Other measures include laparoscopic ovarian surgery (LOS), and in-vitro fertilization (IVF). Despite being used as a first-line drug in treating PCOS, CC-resistance, which is a condition when pregnant women fail to ovulate or conceive, develops in 20% of pregnant women [15].

The administration of human Menopausal Gonadotropin (HMG) or follicle-stimulating hormone (FSH) has been used with or without anti estrogens or aromatase inhibitors to inhibit ovarian hyperstimulation and multiple pregnancies [16]. Letrozole, a potent third-generation aromatase inhibitor, has been effectively reported to enhance pregnancy outcomes with low multiple gestation rates [17]. Several investigations have reported potentially accepted pregnancy rates after letrozole application. Some of these showed that letrozole was superior to other drugs in terms of enhancing pregnancy rates [18-23]. The main advantages of letrozole include mono-ovulation and the short plasma half-life of the drug (45 hours) so that it would be rapidly eliminated from the body. Besides, the anti-estrogen effect of the drug will not persist due to the minimal effect on estrogen receptors (ER). Therefore, minimal/no adverse events may occur on the endometrium and cervical mucosa [24]. However, not enough evidence can be concluded for routine letrozole use.

In this study, we aim to compare the efficacy of letrozole alone and letrozole together with gonadotrophins in terms of mild ovarian stimulation for obtaining favorable pregnancy rates in pregnant women undergoing IUI.

This multicenter study was conducted at the following IVF centers in Egypt: Beni-Suef University, Beni-Suef, the Omuma IVF center, Fayoum, and El-Nada IVF center, Beni-Suef. Patients were included in this study if they were 1) Infertile with PCOS according to the Rotterdam criteria [25]; 2) < 35-years-old; 3) With normal thyroid-stimulating hormone and prolactin levels; 4) Menstrual third day FSH levels < 12 IU/ml; 5) Normal hysterosalpingography (HSG), and 6) Abnormal semen analysis. Patients were excluded if any of the mentioned criteria were not achieved.

Sample size calculation was done using the comparison of occurrence of ongoing pregnancy through intrauterine insemination between infertile PCO women treated with letrozole and those treated with letrozole plus gonadotropins for induction of ovulation. The calculation was done based on comparing two proportions from independent samples in a prospective study using the Chi test, with a fixed α-error level at 0.05. The power was set at 80% and the intervention groups (case: Control) ratio was set at 1. Sample size calculation was done using PS Power and Sample Size Calculations software, version 3.0.11 for MS Windows (William D. Dupont and Walton D. Vanderbilt, USA).

The allocation of patients was done randomly using a random sequence generation method and patients were equally randomized into the letrozole alone (Group A) and the letrozole plus gonadotropins (Group B) groups. Group A received 2.5 mg letrozole twice daily on day 2-5 of the menstrual cycle while group Breceived gonadotropins starting from day 7 plus letrozole 2.5 mg twice daily on the day 2-5 of the menstrual cycle. Gonadotropin doses were determined according to the age, basal FSH level, BMI, former treatment regimens of the patient, and adjusted according to the follicular response and estradiol (E2) levels of the patient. Then intrauterine insemination has been conducted for all patients.

The study has started in May 2019 and continued data collection until reaching the target number of cases. Data have been collected through a pre-designed questionnaire. Each patient was examined on the 2-5 days of menstruation for their weight and length. Body mass indexes (BMI) were recorded. FSH, luteinizing hormone (LH), E2, progesterone, prolactin, and TSH levels were measured by immune-enzymatic method (ELISA) on the 2nd-3rd day of menstruation.

Patients were evaluated by transvaginal ultrasonography on the 9th day of menstruation and lasted daily after the greatest follicle reached 14 mm. For computing, the follicular size mean of two dimensions was calculated. Endometrial thickness was measured in the longitudinal axis of the uterus between echogenic surfaces. Moreover, a 10,000 IUHCG was administered intramuscularly when the greatest follicle reached a 17-18 mm size and 36 h after HCG administration.

The main outcomes of our study include the pregnancy rates in both groups and the significance between both. In addition, the significance in endometrial thickening and the number of follicles will be also estimated. By this, we hope to determine whether letrozole alone is better than the combination of gonadotropin and letrozole administration with the pre-specified doses in terms of the aforementioned outcomes.

Data will be analyzed by SPSS 25 (SPSS Inc, Chicago, IL, USA). Descriptive statistics for continuous variables were done by mean ± standard deviation (SD) and nominal variables were done by variable counts and percentages. Moreover, the Chi-square test will be used to examine the nominal variables. For continuous variables, the normal distribution was tested using the Kolmogorov-Smirnov test and according to the results, either the independent samples t-test or the Mann-Whitney-U test were used. A P value < 0.05 will be considered statistically significant.

We have included 90 patients with a total mean infertility period of 2.6 (± 0.8) years. Patients were equally randomized into 45 patients in each group. The mean age was 27.3 (± 3.6) and 25 (± 3) years for groups A and B, respectively. The mean BMI was 28 (± 1.8) and 28.8 (± 2.3) kg/m2 for groups A and B, respectively, with no statistical significance (P = 0.091). Other variables including the FSH, LH, TSH, progesterone, prolactin, and baseline E2 have been compared between the two groups with the Mann-Whitney-U test and no statistical significance was found. Detailed values and outcomes of these variables are presented in Table 1 and Figure 1.

Letrozole has been recently introduced as the most effective therapy in treating infertility and increasing the pregnancy rates in PCOS patients [26,27]. Although CC has been widely used as the first-line treatment for this condition, letrozole has been proposed as an alternative of it due to its harmful side effects [28]. Letrozole has now been in practice to induce ovulation in both non ovulatory and ovulatory women with infertilities [29-31]. It can lead to ovulation in 62% of CC-resistant patients and can boost the pregnancy rate by up to 14.7% [31]. Besides, minimal side effects have been reported with the drug, therefore, it can be the first line of therapy in patients who tolerate CC, but with thin endometrial [32]. Moreover, gonadotropins are usually used as the second line of treatment behind CC. However, as a result of the minimal adverse effects and the economic advantages of using letrozole, it has recently been widely used instead of gonadotrophins in CC-resistant patients. Gonadotrophins can lead to serious adverse events as ovarian hyperstimulation and even death, and therefore, they should not be used alone [32]. In this study, we aimed to compare the efficacy of letrozole as an ovulation-inducing agent with a combination of letrozole and gonadotropins in terms of enhancing the pregnancy rate, the effect on endometrial thickening, and the number of released follicles per each group.

The difference in demographics among the two study groups was significant in terms of participants age only (P = 0.002) while other demographics as BMI and previous periods of infertility were not. On the other hand, Alizzi, et al. reported significant findings regarding these variables. Regarding the administered amounts of letrozole and gonadotrophins, no consensus has been reported concerning the optimal daily and cumulative doses. However, as reported by Badawy, et al. [33] and Polyzos, et al. [34] we used a fixed daily dose of 5 mg of letrozole which is said to be more efficient than other doses. On the other hand, the used doses of gonadotrophins in our study were dependent on many factors as the level of endogenous gonadotropins, and the demographics of the patients.

Limitations to our study include the small sample size of patients that met our inclusion criteria which may have influenced the results of our outcomes.

Our results showed that both regimens of letrozole and letrozole with gonadotropins can enhance the rate of pregnancy after performing IUI. However, favoring one of them over the other required statistical significance which we did not find in this study for many variables. In addition, our study favors the use of the letrozole which showed significant results in terms of increasing the number of follicles unlike combining it with gonadotrophins which have shown a persistent over-stimulatory effect.

© 2022 Ali HAA, et al. This is an open-access article distributed under the terms of the Creative Commons Attribution License, which permits unrestricted use, distribution, and reproduction in any medium, provided the original author and source are credited.

Background: In this study, we aim to assess the efficacy of letrozole with and without gonadotropins on pregnancy outcomes especially the pregnancy rate, ovulation induction, and endometrial thickness in women suffering from polycystic ovarian syndrome (PCOS).

Methods: We have developed a randomized clinical trial where we included 90 infertile women due to PCOS that met our criteria. Data collection took place at three in vitro fertilization (IVF) centers in Egypt since May 2019 until we reached the target population number.

Conclusion: Administration of letrozole alone or in combination with gonadotropins enhances the rates of pregnancy in PCOS patients together with the minimal adverse events regarding endometrial thickening and frequency of ovulation.

Figure 1: Comparison of the baseline characteristics of patients in the two groups.