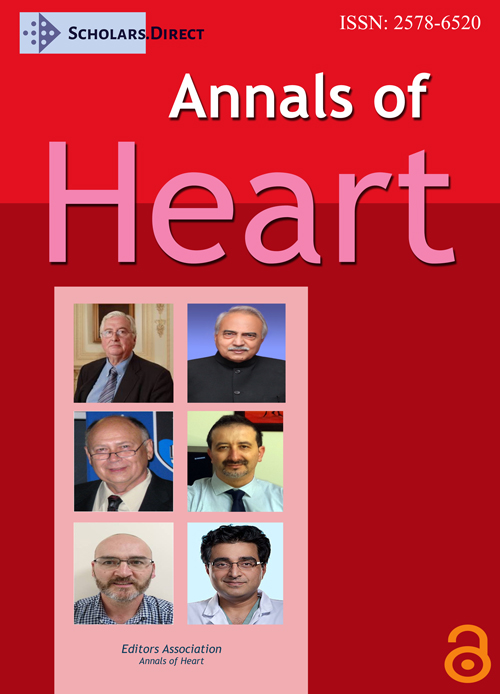 Mechanical hemolytic anemia, although there is a well-known complication of mechanical valve replacement is reported to be rare after mitral valve repair. Mitral valve repair after the likely cause of hemolysis that occurs, the ring seam on the projecting bumps erythrocytes, free-moving court's whip movement, partial ring dehiscence (dehiscence), and reverse leakage current of the ring or plejit to, as a shock to the atrial wall of the central jet [1]. This case developed hemolytic anemia after mitral repair work was mechanical valve replacement. Rarity of these cases and would be useful to be submitted in order to emphasize the importance of redo surgery was considered successful.

Which it is operated with a year ago due to mitral regurgitation and mitral valve repair; mitral P2 of the quadrangular resection, sliding annuloplasty, A2 of the court to transfer 31 mitral circular semirigid ring applied to 64-year-old male patient the last 2 months of effort during shortness of breath, was credited with increasing complaints of palpitations. Mechanical hemolytic anemia the diagnosis of hematologic consultations was made. Cases made laboratory admission to the hospital examination: increase Lactate Dehydrogenase (LDH), low hematocrit and hemoglobin, red blood cell shape and other hematologic data were normal. Increase in serum unconjugated bilirubin, increased bilirubin, increased urobilinogen excretion, serum haptoglobin absence, reduced glycosylated hemoglobin, hemoglobinemia, hemoglobinuria, hemosiderinüria decreased serum levels were detected. Cases of liver and biliary tract MR cholangiographies normal, indirect Coombs was negative. Transthoracic echocardiography in patients with mitral valve regurgitation was detected in P2 (posterior leaflet). The annulus ring was found to be in normal anatomic position.

Anesthesia premedication; the patient was given 5 mg oral diazepam the night before the operation. Operation 30 min. First, 10 mg of intramuscular diazepam was injected. Whether monitored patients in the operating room, venous and radial artery catheter inserted after induction of anesthesia Fentanyl is 30-50 mg/kg were. As a muscle relaxant pancuronium 0.1 mg/kg was used. Anesthesia was maintained with 3 mg/kg/min infusion of fentanyl was used for the inhalation of isoflurane as necessary. Through the internal jugular vein was implanted in the pulmonary artery catheter. Rectal probe was inserted for monitoring temperature during CPB to follow Foley urinary catheter and urine output during operation. Median sternotomy was achieved by applying the mediastinum. Severe pericardial adhesions were separated by blunt dissection. Meanwhile, the femoral artery was kept ready for emergency cannulation. Before cannulation 300-400 U/kg was heparinized with heparin Activated Clotting Time (ACT) has tried to keep over 450 sec. Arterial the ascending aorta, superior and inferior vena cava were placed double venous cannulation. Aortic root needle is placed. Vent cannula was inserted into the left superior pulmonary vein. Following the initiation of CPB systemic body temperature was lowered to 28-32 °C. After putting aortic cross -clamping the aorta root isothermal blood cardioplegia (10 ml/kg initial dose) was administered. Between 23-28% hematocrit during cardiopulmonary bypass pump rate is 2.0-2.5 l/min/m2, and mean arterial pressure of 50-80 mmHg was achieved so that the non-pulsatile perfusion, an anti grade blood cardioplegia was given every 15-20 minutes. Waterstone's mitral valve from the trough has been reached. It was followed severe fibrosis and thickening of the mitral leaflet. Mitral circular semi rigid ring was excised. Sutures in P2 and A2 of the transferred chordae, plejit and sutures were removed. 31 mechanical valves was replacement in to the mitral area. Posterior leaflet was preserved. Cover control was performed.

After the implantation of left atrial Cover 4.0 prolene suture was closed primary. Venter stopped, started manual ventilation. Patients in the venting cannula in my left atrium was connected to the air extraction cardioplegia line, the left atrium from the cardioplegia line; From 1000-1250 cc isothermal pump it was filled with blood. My heart is filled with aortic root was removed in the free flow of air inside the needle with blood heart. After the patient was brought to the Trendelenburg position again pressed the left atrial cannula vent to the carotid artery by the anesthesiologist is in the active state and attracts cross clamp was removed. After several strong contractions of the heart's table was brought to the neutral position. SVC cannula is pulled back into the right atrium. Heating was continued from aortic root needle free removal by air flow. Patient flow after deducting the temperature reaching 37 CPB leading up to his end. Heparin, and protamine sulfate 1:1 was neutralized form. After the arterial and venous cannulas to control bleeding after mediastinum drainage was 32-36 F. Myocardial pacing wires placed sternum was closed.

3 months in case of follow-up in all hematological parameters were provided outside the partial normalization of LDH height. General skin appearance, increased exercise capacity, dyspnea and improved color change in the sclera.

Mechanical hemolytic anemia after mechanical valve surgery is one of those common complications. However, it is reported that in rare cases, in mitral valve repair. Mitral repair it is increasingly preferred over mitral valve replacement. In patients who were operated with mitral regurgitation due to mitral annular ring it is a must use. There is also an increasing use of many intracardiac sutures with new prosthetic materials and technical reasons. This change is consider in the future may create more hemolysis [1].

Hemolysis after mitral valve annuloplasty is often seen in the first months following operation [2,3]. But late in the reported cases it is seen. In this case relatively uncommon symptoms during the first months after 10 month increasingly predominant. According to the deficiencies in the low level after mitral valve repair can cause hemolytic anemia. 2 months postoperative echocardiography was found in the degree of mitral regurgitation work in this case. Cases were available early in minimal symptoms. However, with the process it showed an increase in complaints. Symptoms were considered more interestingly with anemia also revealed an increase in mitral regurgitation process progresses. The increase of the valve pathology hemolytic anemia was thought to act as a catalyst.

A number of studies have been reported due to be completed in the first 3 months endothelialization can be reduced hemolysis [4,5]. In a case reported by Inoue, et al. Despite the initial severe hemolysis, hemolysis gradually decreased and was controlled months after surgery [5]. The authors suggested that this may be due to improved endothelialization.

Engin Ç and colleagues hemolysis seen in the first period of 3 months in another case have reported that the then treated with medical therapy. But again, the same study did not respond to treatment should not expect much for severe anemia in surgery endothelialization partially prevent regurgitation jet is not much, is not considered as an indication for mitral insufficiency and incomplete repair reoperation, the expected endothelialization along with supportive therapy as a good option [2]. However, in spite of our patients followed for more than 1 year in the table have been observed improvement was observed that increasingly more aggravated. The patient was operated on after the repeated blood transfusions were made and the complete recovery was not achieved. 31 no mechanical mitral valve replacement was performed in patients undergoing mitral valve repair other problems in a leaflet, the chordae, papillary muscles and the annulus fibrosis development risk. Fibrosis is caused by a loss of function by disrupting the lid cover mobility after surgery. This phenomenon made macroscopic and cellular pathological examination leaflet thickening, fibrosis, and especially the anterior leaflet chordae were observed for serious fibrotic and cellular proliferation. This diversity of crush syndrome mitral repair techniques, the chordae, leaflets were thought to be associated with the traction and milk.

Mitral valve repair cannot be in the choice of cases is variable. Pregnancy is a contraindication for use antikoagulation, while in other cases the life expectancy of 10 years and six cases of bioprosthetic is preferred mechanical valve is a generally accepted understanding. In this case 64 years, good physical condition and mechanical valves due to be over 10 years of life expectancy were preferred.

When compared to results of the literature, our early-term postoperative outcomes including the rates of major complication and death were comparable. There were several limitations in the interpretation of the results of our study. The major limitations of this present study were the small number of patients in the study groups and evaluated data were limited. A larger sample could have increased the statistical power of our research.

The incidence of postoperative hemolysis in patients undergoing mitral valve repair using the public is more than the rate normally [6]. Clinically, mild cases can be monitored medically, but we believe that deep or recurrent symptomatic hemolytic anemia because of blood transfusions in patients requiring surgical intervention performed to cause hemolysis, which should eliminate the mechanism.

© 2017 Yasa H, et al. This is an open-access article distributed under the terms of the Creative Commons Attribution License, which permits unrestricted use, distribution, and reproduction in any medium, provided the original author and source are credited.